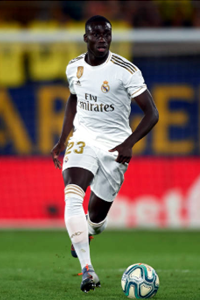 I made a set for him, I don't know what they gonna do with three left back, but at least Mendy is the youngest and the most promissing. He's pretty good, nice crosser overall, very agressive offensivly speaking and made some nice interceptions in Ligue 2. Pretty fast and repeting run a lot on his side. He like to cut to the center with his right feet to shot, but well he sucks at striking balls lol. Also strong on dual with a decent first touch. Horrible close control anyway. A nice promissing left back overall

He looks a bit faster and better technically, nothing crazy but his DA is probably low 70s.

His defending is weird, he's good at dispossessing but he often leaves loads of space behind him, he's gotta learn to stay in position when he needs to.
Everyone knew it was impossible. Then came along a fool who didn't know it, and he did it.
Top

Ocrin wrote:He looks a bit faster and better technically, nothing crazy but his DA is probably low 70s.

His defending is weird, he's good at dispossessing but he often leaves loads of space behind him, he's gotta learn to stay in position when he needs to.

Agreed. He's been very good since January or so. Top speed looks like a 85 at least to me. His balance (pc) could get a slight raise. DA i'd have said between white and green, around 75. Shot power can be increased a bit too maybe.

Something that has greatly improved too is his aggression / teamwork. Aggression could go up to 85 and teamwork i'd guess around 72.
Top

I do think he's even faster. I had a look to Fifa stats for his speed. Acc > TS looks interristing. I don't know yet, but it makes sense to me, he's able to have a really great burst.

Also I think response could be better, he's a lot in movements. When he making a pass to his Winger, he not stop running, going ahead near the next pass to be free to cross. Looks near the game on offensive played. I need to have a look to stamina too, don't know yet if a better value is worth and if he's able to maintain that energy on full games.

About attack, it could have a raise too, he create some danger, have different skill in his set up, able to cut to the center and trick or shot, able to make one-two with his partner then cross or speed difference before the cross.

I agree on the pace raise. I dont know about the acc/ts gap since i play only the newer games, where having an EP<TS helps recreate that feeling of stiffness. I have him at 87TS 85EP in my set.

response/attack/teamwork combo could have a slight raise too, true. I think his technical stats deserve one too, 72spa 74lpa for example and maybe a point up for TEC and DA
Top

I agree he's faster but I'm not sure regarding values. He's very similar to Mendy, his turning is non existant but he has a lot of power while running.
Everyone knew it was impossible. Then came along a fool who didn't know it, and he did it.
Top

Sanji, isn't EP the same value as Agility ? It would make him able to do unrealistic turn. In real he struggle so much to turn with his body. He looks like grey Agility yet.
They have eyes but cannot see; they have ears, but cannot hear; they have tongues, but cannot speak. They are like cattle.
Top 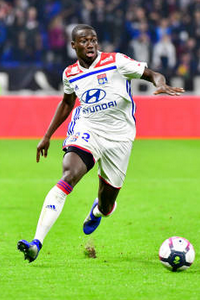 Updated. One of Lyon's biggest attacking threats of the season. Would have been in the top 3 players without the injury.

His stamina as mentioned is consistently great. Never tires. Goes hand in hand with the one point upgrade in aggression, he'll provide those attacking runs til the end and as soon as he has space to run into. This is also why i upped his attacking prowess stat without upping his Attack. Not sure but i think we up Attack the more "dangerous" in attack a player is? If that's so he could go up.

His TS could go higher than 88 too but let's keep it there for now. Rapid kid, possibly low orange.

He's also been reliable at the back. Some big improvements on his first season with Lyon. Rarely - if ever - got beat, positioning is on point. Lowered his ball winning stat one point while i upped his DEF/DP because although very good in duels, that value was a bit OTT.

His SA is raw but he scored a few great goals. Great SP too, even on his weaker foot. Lastly jumping reach is quality, always on top.

I've been conservative in Jump, Def, Shot Power, Stamina. SA and TS could go one point higher too.

DA, Tec and especially passing attributes are weaknesses in his game, a bit like the other Mendy. Ferland is much worse at crossing and putting some curl on the ball. Otherwise, a monster LB with everything you could possibly want.
Top

I wouldn't speak of him as a monster SB. He's a monster physically and that's all, and still very lacking in terms of overall technique and positioning.

Attack and Attacking prowess are eventually treated as the same attribute and it's preferrable to give them similar values. It's there to replicate the amount of danger a player creates, but willingness/tendancy to attack is also tied to aggression and I think that's what we're talking about when it comes to that guy.
Everyone knew it was impossible. Then came along a fool who didn't know it, and he did it.
Top

Haven't noticed big issues in his positioning though.
Top

I truly don't understand why such big club like Barcelona wants him. He'll set on bench there. He's a monster physically, no doubt, with his insane speed and great energy during the entire game. But he's so far away of a modern sideback. When you see how much arnold is good at crossing, how much jordi alba is good technically. That make me say is a bit overrated by the media, and I don't understand all the hype on him. But it's good for Lyon, they gonna sell him for a good amount of money^^
They have eyes but cannot see; they have ears, but cannot hear; they have tongues, but cannot speak. They are like cattle.
Top

As I noted on Discord, he's an insane worker with standout stamina and aggression. He puts most of that energy in defending and he does it well, with nice overall awareness, positioning and tackling. He's very, very lacking offensively though, he does make nice runs (which is why AGG remains high) but can't dribble or cross for shit, and can't pull off anything technically clean on a consistent basis.

He's also obviously two-footed, too bad he can't put it to use on the ball.
Everyone knew it was impossible. Then came along a fool who didn't know it, and he did it.
Top

One of the best defensive SB's from La Liga. He needs a higher value for Defence to get a more realistic set. His Attack is very decent, low 70's probably.

I don't like to work with Barcelona or Madrid players, but this guy is forcing me to make a little effort

Yeah he's reliable and never lacking effort. Obviosuly, his attacking proficiency is sub par, but his impact on the team has been paramount. In a team in which defensive effort and roles have been inconsistent and blurry, he's a balancing factor very much like Valverde is. Madrid was a broken team not long ago, but it's workhorses like these that make a team champion. I'm happy for both of them.

Should he have such high aggression? He doesn't seem anywhere near that aggressive to me, seems to sit mostly just around the halfway line and up a bit from it.
Also, I'd say he's definitely in 90s for both speed and acc, especially acc. I'd also say hes quite a bit stronger, very sturdy, 83 seems more than fair. I'd up his agility a little too, not bad on his feet.
Top
Post Reply
22 posts