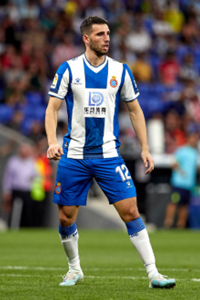 toaad wrote:It's kind of obvious that he deserves an update(nothing SO different) but if he has this numbers is because he showed this, recently and constantly along his career.
This time(nowdays) that he showed better skills is as an exception in his career, where the vast majority was exactly this player that ''you see the first post''.
I trust in the work of the Argentine League moderator's did, it is necessary be careful to don't go on emotion and want something totally different because of four months in a career of four/five years.

I even already found this set very strict but is fucking wrong judging by 3-4 games.

Of couse mate, we will never forget what he did on his past, this year he is doing good games, fighting a lot and running to the box, is just few changes is not a full set. A player can change a lot on 6 month.

What changes i forget made before moving? Increase his mentality, slightly better attack and header but no more. I find pretty accurate the set tbh if he is not well surrounded, he can't score by his own movements or by his own skills despite of some good kind of movements in attack.

I'd go with those changes and probably a better response as well.

That is what a area that I wanna a raise, not a really great value, 2 points or at most 3 not a big change IMO, another area is Agression, just to make him move more in direction of goal.
Top

I think his response is really good, something like 82-84.

rafzin wrote:Of couse mate, we will never forget what he did on his past, this year he is doing good games, fighting a lot and running to the box, is just few changes is not a full set. A player can change a lot on 6 month.

Of course a player changes in 6 months, only need to be careful when upgrading.
Top

Well, this is my final update here, likely.
I updated he with everything that has been discussed for a long time, since he left the Argentine League for what he did and does currently.

The update that certainly part of the people must call "interesting" is about his kicking ability.
He has a "decent" shot technique, say so. Some good shots with the ball in the air or without dominating, and some very unusual. This value does not make it dominant striker who makes volleys all the time, but neither becomes someone who is unable to kick without domain.
Shot Accuracy is the issue of moment. In fact, he is not a striker who kicks cleanly and hard way to form the net, many of the kicks go extremely close to Goalkeepers or about them. But still able to score with some frequency.
Well, maybe these are not very convincing arguments. But my goal is just to clarify that with the current numbers he continues having limited kicks, but this set gives him what he needs. Without raising it to excess, without reducing it to a minimum. Within the Brazilian and global ladders, he remains poor to kick.

Another thing I need to mention is about his participation in the attack. He is a player who is always in the area to complete or support, but also back to cooperate defensively, I believe it to be an interesting case of good teamwork (as suggested by several people) and good aggression. The value key that helps these constant movements is the response. Its reaction to the movement of the ball is very good.
Using example of big names with great response, good aggression and teamwork we can quote Müller and Cavani. It is a somewhat similar style, though in totally different scales.
Top

Just saw his goal vs R. Sociedad and remembered thinking that he had potential as a very high heading value, better than current level for sure
"Imagine being this retarded @lucashag you fucking moron, you're seriously trying to write about football and think lingard is a bad player? you're a fucking disgrace, a fucking animal like very fucking south american moron" Relja's burner
Top

Very well placed header vs Celta, with no time to think or adjust his body: https://youtu.be/di2yaxQJLKc?t=63
Top
Post Reply
90 posts