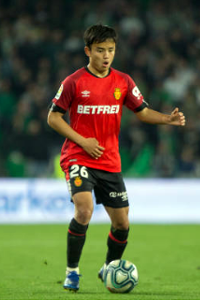 This its actual stats?
Top

Hello, I would like to know why statistics like age, club, shirt numbers and skills data are not shown
Top

[club][/club]Hello, I would like to know why statistics like age, club, shirt numbers and skills data are not shown
Top

NIAN1800 wrote:[club][/club]Hello, I would like to know why statistics like age, club, shirt numbers and skills data are not shown

Forum is undergoing some issues. Visit his profile at the main page and you will most likely be able to see them.

This kid is a very interesting talent. While he has the silky smooth ease about his dribbling that really stands out, what hit me the most was the fact that he actually seems very adventurous with his passing, that was unexpected. That really makes him quite the prospect, his delivery was a little lacking, but the ideas and vision behind were pretty impressive. He'll probably be jerked around by Madrid, put into squads that may not fit him, then repeat the same process that we see time and time again. He's definitely got an uphill battle, but hopefully, he isn't another casualty of a top team wasting talent, and he actually gets what he needs to develop.
Top

He was a breath of fresh air vs Athletic Club. As soon as he was brought in, he channeled the attacking play from the right, but also had some nice actions closer to the left, having all of Athletic's defenders (specially Yuri, who would later face the consequences) on him as soon as he was on the ball. He attempted to juggle with them, and damn was he good at it, his retention is great and he does look like a very smart player. He's still so tiny and looks so delicate, Yuri tried to firebrand his leg from the very first moment. Despite Mallorca looking like a solid side, I have no doubts he's going to become a starter sooner rather than later, he's just a total gameshaker but I'm sure his contribution would be neat with a little more freedom, as I believe his creative capabilities look raw but SUPERB...despite his somewhat erratic and weak passing, but surely when his body is fully developed he's going to be a GREAT attacking midfielder.

His first assist in La Liga, vs Getafe https://streamja.com/Wyzj
Top

As I said on Discord, he strikes me as a player who's obviously smart, with a nice burst and nice DA, but he simply can't pull off what he tries. He's a very creative player and it shows in his intentions, the accuracy just isn't there, whether it's passing or dribbling. Passing stats should probably stay low for now, though they maybe higher into whites.

He's shown glimpses of better shot power and passing. DA looks good but could stay at its current value. Physically he's very underwhelming though, getting manhandled in a lot of duels. He also displays potential for decent jumping but his BB and lack of presence against taller defender hinders him.
Everyone knew it was impossible. Then came along a fool who didn't know it, and he did it.
Top

I agree with this analysis. Hype player, I like the guy and all, but surely there's something missing, a killer instinct for a lack of a better word? in everything he says really. I think he's a formidable sub, no wonder Mallorca's coach is super annoyed about having to bear with questions every single press conference on why he isn't a starter, because it's pretty damn clear.

He's definitely a solid dribbler, but unfortunately his end up product is weak just like most talents of his age.
The most frustating thing of him is when he attempts mid-long range shots with several opp players in front of him, not being really picky in those situations.
"Willy Wanda is Chinese!!!"
Top

I've given him an update

Fixer wrote:I've given him an update

The intelligent people are full of doubts while the stupid ones are full of confidence.
Top
Post Reply
14 posts • Page 1 of 1