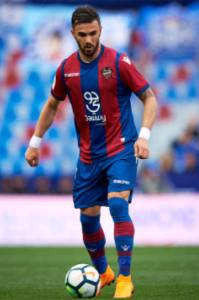 Scored the most important goal of his career tonight against romania , giving us 3 very important points . What a season for him , 22 goals ( 5 with NT ) :
PMTP & Mia San Mia
Top

He really is on fire , after a great 2015-2016 season with 22 goals , he has started even the new season with lot's of goals, 5 in 8 matches for club and country , here is his goal against Macedonia : [youtube]http://m.youtube.com/watch?v=6p6tv9G-HYg[/youtube] . Also , this set is very accurate but he still can have some tweaks . He plays for Zürich now . All shooting stats can have a small boost , AGG should go up to mid yellows IMO and also his FORM should go up

Guys , Sadiku has been in a great form for 2 seasons now . Last season he scored 22 goals for club and country and until now he has scored 16 goals in 32 matches this season ( just 1 with penalty ) . He is showing his goal-scoring abilities with Lugano , which is now very near to reach the UEL zone just because of Sadiku , who helped them go from 9th post to the 3rd in just 4 months

. Seeing his very good form in this 2 seasons , i suggest at least FORM 5 and also , he has improved his shooting ability , notably his shooting power . For me a small tweak in SA and a high greens SP would do the job . He isn't that agile anymore cause he is another type of player right now and i suggest something like 76 for his EP . And the last things are his BB and BC . He is much more built now and uses his body a lot to defend the ball so i think that something like BB 80 would be a very good value to represent that he is quite strong now and also his BC isn't that bad like this set suggest . Sadiku can control the ball very good with the chest even when the opposition is near him , so i suggest a small tweak even here

Another 2 typical very beautiful goals from him vs Israel :

. Also , he really deserves a much better team than Lugano

Can anyone say something about him?
Top
Post Reply
26 posts