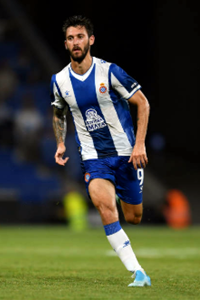 I'm pretty sure that his TS and ACC are FAR better. He doesn't seem a CF, he has awful BB and great AGI (could be in 80/81 similar to Teofilo). I've tested in the game and with this set doesn't seem reall. I suggest an important raise of these stats:

Yes but he have a great balance, seriusly, he "aguanta" very good the ball, y put it 80 , the rest agree
Top

I´m disagree in the balance, he can´t bear the pushes of the defenders when he jump or run. Agree in vickingo's numbers.
You want a grat signature of your favorite player or team, a new Avatar? Make your order in the Designs Workshop Thread

vickingo_73 wrote:I'm pretty sure that his TS and ACC are FAR better. He doesn't seem a CF, he has awful BB and great AGI (could be in 80/81 similar to Teofilo). I've tested in the game and with this set doesn't seem reall. I suggest an important raise of these stats:

Seen the guy play live like 10 times. Let me see you something: I dont know the stat name for that (Balance?) but he is very good at protecting the ball (aguantarla de espalda). He still has to develop his body and gain strength, but he´s better playing de espaldas than a lot of bigger players. Look at this goal against Tigre and you will know what i´m talking about:

PD: I kwow that is against Galmarini (20 kilos mojado) but anyway...
Top

But, i think that is Technique and Agility, very good on both. I suggest:

i'm agree in that... but maybe whit ACC in 82
THANKS FOR EVERYTHING, THERE WILL BE NOT ANOTHER LIKE YOU

For more than a few say no. I like the way they play with the body (BB) against defenders...
Señor Ascenso | Mr. Lower Leagues
Top

I actually find him stronger than 77. Agility helps him, but 2 more points in BB wouldn't hurt.
Farts stinks like a mother fucker!
Top

This guy is incredible as I've always said. He has too easily to be in front of the keeper, amazing intelligence to move around the defenders and great intelligence to avoid the off-side and try long careers to blank space to look for teammates' passes. This is influenced IMO because of his ATT and obviously because of his TW, he has a great understanding in killer passes from the midfield (mostly Jonathan Gomez and Acevedo) and he creates danger all the time. Look how he dismarked from Matheu twice and defined also amazing without the ball touching the keeper in both situations. This also is a great virtue, the ball when he defines never touchs the keeper and his placement is a great thing, probably better than the current number; he hasn't an impressive ST, but his placement of the ball into the goal yes it's impressive, looking for the space where keeper doesn't reach (in this case look at 1st definition, difficult angle and the only space where the ball could pass is where he defined between Assmann and the post, just amazing). But most impressive as I've said before are his movements, and I realized agian his amazing TS/ACC to look for spaces in attack. I watch similar (Saving the obvious distances) to Pipita Higuain in his movements, definitions and speed.

Good note, I am preparing a set for him, this tournament was not a good performance as previous.
Top

by Torneo Clausura. 04/05/2012
He played as CF. He had a bad game, was very inaccurate in zone rival and 0 effectiveness, his chances were clearer with head and poorly resolved, but when he was a post player had better performances, there could comb some balls with his head and stand with his back to goal, was a good pivot.
Top

Poor Chucky, his MENT is too low, he was very nervous for the penalty kick against Argentinos and stopped him. Then showed a great header in the game, also has a decent BB, pivoting between great defenders as Sabia and Escudero. No doubt this is not the best tournament.
Top

Well I think that after updating his MENT we can make a more general update, no doubt had a poor performance the last tournament, which saw him in many games.

From what I could see a player did not seem very fast, is quick to be CF's, but neither is a sprinter. But it's something I'm not 100% sure, so I will refrain to suggest something here for now.
Top
Post Reply
121 posts