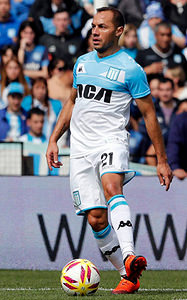 I agree his FKA could go up, something like 82 for now. But his curling is also superb, theres a lot of spin in his set pieces, i'd say 86.
Descansa en paz Chucho
Top

Sounds ok, but I wouldn't go further 82, since the award for the best FK taker in our league is for Daniel "Chuky" González (Audax).
Agree with the suggested curling value though.
"Willy Wanda is Chinese!!!"
Top

Finally anounced as a new Basel player:
http://www.fcb.ch/news/show/byItemID/de-de/10044/28054/16/7
He still has to play Campeonato Petrobras' playoffs and Copa Libertadores, so I will move him to Basel once he finishes his participation in both tournaments.
BTW, he's now listed as 166 cm and weights 63 kg (it makes more sense, TBH), according to Basel website (at the end of the given link).
"Willy Wanda is Chinese!!!"
Top

Just had to post his debut on his new club.

Despite that amazing Free Kick I'm more impressed on how he played, it is early to say anything but i hope he maintains this level, he sure will get an update if so.
Top

this guy needs more stamina! 87 at minimum! The only one who always gives all for NT
Bloody Curse!
Top

Nahhh, really he doesn't need more STA. 84 is still a great value for a DM like him, who plays quite deep.
He's just intelligent enough to cover the midfield and move himself in the proper moment and place just when needed (hence he has Covering).
He's mostly into sending long ball to the flanks (which justifies Pinpoint Pass), but he doesn't run much off the ball in offensive display to
require a higher STA. Xabi Alonso has a quite similar style of play, and Díaz is not over him in that aspect.

By the way, his lack of pace is quite frustrating. I think I made a mistake to downgrade his TS just to 77 before him moving to Basel...
He's more in the 74-75 region to my eyes (closer to Marco Estrada).
"Willy Wanda is Chinese!!!"
Top

I think he deserves S21 - Step On Skills


He often uses L Feint (seen plenty of times using it playing for Basel) and sometimes Drag Back Turn, in exception of Backheel Feint which i find very unlikely to happen for any players anyways.
Top

I agree with Step On, it somewhat compensates the lack of *Tactical Dribble in new-gen PESs.
I'd also add Weighted Pass to recreate his technique for putting long pass and/or switching the ball to the other flank with pace.
"Willy Wanda is Chinese!!!"
Top

I think that his passing may be underrated. He is not far from Pizarro in accuracy (he is at Speed). Spa could be easily 86,87. Lpa the same, extremely accurate, 87.
BC better. His technique is his best strength. Ill go with 85.

I think the set is essentially fine as of today.
Maybe EP could be slightly raised, but the overall set represents his strengths and weaknesses very well.
"Willy Wanda is Chinese!!!"
Top

I also belive that this set is fine, but I actually find his TECH a bit low at 82
Top

He used to be an Anchor Man as Víctor (aka Vickingo) suggested in the past, but not anymore.
Nowadays he just stay deep at times, and now he takes more risks when going forward.
I've noticed that in Basel he has more freedom of choice in terms of movement, specially when having Serey at his back.
"Willy Wanda is Chinese!!!"
Top

Made an overall downgrade in some stats, specially the physical ones.
He's gradually played below the expectations, and now he's mostly a sub... Even Taulant Xhaka plays more than Díaz.

he's a sub mostly because he's injured right now, instead of downgrade some phisical stats, it's more a term of form and injury tolerance
(Why his drible was slowed?)
Top

Basically cos' he just walks on the ball or attempt the step on to keep the ball till' he finds an unmarked teammate for a pass.
His DA is neat for being a CMF/DMF but very far from world-class standards.
"Willy Wanda is Chinese!!!"
Top
Post Reply
92 posts