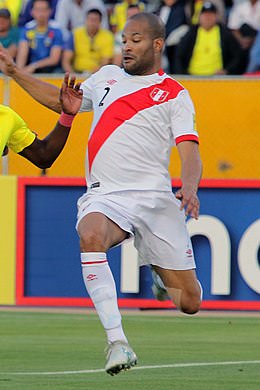 MOve him in the editor to
Top

He doesnt play at all. I mean he is ALWAYS INJURIED.

But when he is not injuried, he make excelent games with Peruvian NT.

According to manoloxcr17 he doesn't play much for Peru because of injuries. Today the Peruvian coach said he wasn't happy with Sporting because Rodriguez played to much and got injured, and they had explained this ''delicate situation was explained'': that he only played those games for Peru because of the terrific job the medical team pulled off.

I suggest to put IT : C. And i would like to raise he's BB he seems very strong. He doesn't weight much so i suggest raising it to 85.
Sporting Clube de Portugal meu amor / Working on new sets and updating Liga Sagres
Top

Agree with this. It's a shame his injurys keep stopping his progress.
Top

Agree with this. It's a shame his injurys keep stopping his progress.

Could someone please update this?

Agree with this. It's a shame his injurys keep stopping his progress.

Could someone please update this?

He needs a fix in physical attributes. Nowadays he's a great defender, but he's lost speed and form (so few games played in Junior). BTW, he is a specialist in aerial duels (look this video), I propose a slightly upgrade on his jump.

DEF prowess should be on 78 too.

BTW, form needs to go down to 2. He played too little games last year and this season he never played. Lasy year he was injuried 8 times! and when he played he never stood out, only with the NT a couple of matches, in his club he was not that impressive. He is getting olden and injuried are hurting him a lot. This season he have not played any official game and probably he wont play for the rest of the year.
Better to die quick, fighting on your feet, than to live forever, begging on your knees!
Top

He signed his new contract with Alianza Lima. This is actually a big bet on him, he did not play a single game in more than 14 months. Lets hope he can play often from now on
Better to die quick, fighting on your feet, than to live forever, begging on your knees!
Top

He looks way slower, specially in ACC terms and his SPS also seems to be lower, like low 70's. Also I think slightly lower AGG and TW is needed at this point.
Better to die quick, fighting on your feet, than to live forever, begging on your knees!
Top
Post Reply
38 posts