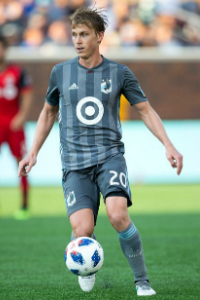 looking a lot slower now - gassed early despite being kinda static compared to some other mids like Collin Martin. He has some quality passes in him and can strike an awkward ball (though misses a lot/comes "close") and used to give the team a lot of bite in the mid, clattering in for many balls - don't really know why in review of 2019 he looked so out of it ... maybe it was the stark contrast of having a 33 year old Alonso able to out run him physically hahha - maybe that is one of his issues - he looks to lack some endurance/stamina qualities that you expect from player that inhabit that middle area of the pitch. Either way he and his other conspirators in the engine room in 2017-2018 is a big part of why Minnesota conceded 70 & 71 goals in the respective seasons - it was a really subpar mid that let too much action through and failed to control matches well (Ibson).

Was mis played sometimes out wide more recently, has no qualities that let him function there, just wasted. Best probably as player to set up others from the 10 spot and lurk in to try on rebounds.
Top
Post Reply
2 posts • Page 1 of 1