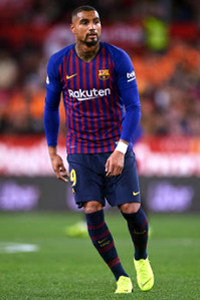 Agree with 7oodam on SPA.
Top

I think his Stamina should be decreased, something along the lines of 84-86, he barely lasts a whole match and always looks tired.
Top

For a guy of grandiose speed, he struggled to show it. Saw him on at least 3 full long runs and he just wasnt as fast, 83 max for those. Also agree with 7oodam in everything
Descansa en paz Chucho
Top

Besides, he gets frustrated often and thus, his focus in the game gradually fades away.
For me, MEN 79 seems way too much. Being generous, I wouldn't go further 75.
"Willy Wanda is Chinese!!!"
Top

I will add that he isnt this agile as i said before. He was at 86 previously, but stll is to high imo. Dont think he is this fast. Again, i suggested a decrease but instead of it, they increase to 87... I see him at 84 TS.
...U dared to enter my world...

I agree on everything, but TS. I remember his run against Nagatomo against Inter last season. He outruned him easily. He really doesn't show that speed so often, but I wouldn't go lower than 86 for TS.
Top

Maybe we could keep TS at 86 and further decrease his ACC, like 81?
I don't agree with green AGI though, his turns aren't that slow. I think 80 would be good enough for him.
Top

Agility is definitely too high. Agree with 80 max.

And he showed some good accuracy in his shots yesterday. Even if he didnt hit the target all the time they were very close to the posts.
Top

No decrease in ACC 83 is fine. He is very agile I don´t know why everybody is crying about 83 AGI. And why a decrease in TS? He has showed that he is very fast, and we are just starting the new season. Dont judge him now when the players are out of form and competition (Prince has not played eurocopa or olympics or any shit tournament like other players). Judge him after 6/7 matches, to focus now on him to decrease his stats is not ethic.

About Shot A, as I said before he has improved a lot since last season, scoring amazing accurated goals (he said in an interview that he was having special training with far away shots to goal), he deserves at least 79.
Top

i've him with *middleshot from , like , a lot....
he's always shooting from distance , more than a handful for match ,
definitly a tendency on him
Saving Private Adrian Agree with everything 7oodam said (as always

He can get long shot . And the rest are vrey good . May SPA can be added 1 point .
Top

Yeah he should definitely get Long Ranger, he even screws up a lot of attacks because of this, always willing to shoot from outside the box but without much success.
I read a statistic somewhere that he took the most shots in Serie A in the first 3 rounds, although not really sure about this, but he did take an awful lot of shots.
Top

MS and LR aren't even to be compared. those are two very different things. MS enhances the shooting ability and adds a dipping effect on shots while LR is just a style and tendency card. KPB deserves LR but no way in hell does he deserve MS.

What about Box-to-Box do you think that is something that fits him?
Top
Post Reply
299 posts