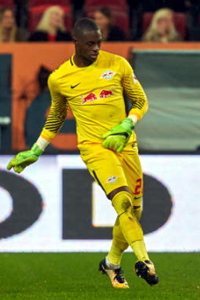 He's an interesting prospect.
It's a shame that there isn't much coverage of his performances, but he's clearly more solid than your average GK youngster.
His performance at home against Napoli was arguably his best match so far; I don't know if anyone else watched it.
"Willy Wanda is Chinese!!!"
Top

I've managed to watch him a bit lately, and I was probably wrong when assign him rather conservative passing stats for a GK. Actually he belongs to the new generation of keepers which have heavily trained with technical abilities (specially ball distribution with passes). And Mvogo is a proof of this. He doesn't have much trouble showing his passing abilities; he usually attempts incisive passes which are almost as good as a field player, and he can start quick counters thanks to this. Both SPA and SPS look closer to high 60 or even low 70s for what I've seen of him.

He also reveals his features of a modern GK when rushing out in one-on-one situations. He becomes a sort of a sweeper-keeper when required, quite similar to Neuer but still a little bit raw in that aspect. AGG needs to be boosted for sure, again around low 70s at least.

He still needs to work in some points, mostly in parrying/handling, the way to command his D-Line and his movements inside his box (specially in set pieces). Once he improves those things, he could become a top class keeper. This could be his last season in Swiss football, but I'll still keep an eye on him for the time being.
"Willy Wanda is Chinese!!!"
Top

This guy is really hard to rate.
When inspired and focused, he looks like a quality keeper, specially pretty solid as a shot stopper. But when he's out of form, he becomes rather useless, though the defence of YB is not particularly consistent.
He can show fantastic performances, like against Shakhtar last month or Napoli or Sparta Praha 2 years ago.
I think Mvogo needs an important boost in pure goalkeeping and passing stats, but his Form should go down to a 3.
Since YB will face Olympiacos in Europa League, I suggest Greek mods to have an eye in those games.
I'm sure Mvogo will earn either a MOTM or Failure of the match

He's really a quality keeper when in form. He's fairly inconsistant though, so it is not uncommon to see a string of solid performances of him, followed by one or two poor ones.

He will have the chance to play UCL with Leipzig next season. Let's see if he manages to rise his level and form in Bundesliga.
"Willy Wanda is Chinese!!!"
Top

Updated for what I've seen of him over the last 2 years.
Some stats may look hyped at first. But trust me, they are really worthy to keep an eyes on (specially RES).
He's like of the school of his "countrymate" André Onana (consider those quotation marks): He has the agility and acrobatic style of most black-African keeper, with great reflexes, but they were trained intensively in Europe to enhance their ball distribution massively. Their handling and movements inside their own, respective boxes are not that great though, and they need to work harder to improve those aspects of the game thereafter.
"Willy Wanda is Chinese!!!"
Top

Considering he's barely played since joining Leipzig, he looked really impressive in his international debut against Iceland.
Specially when stopping some mid-long range shots from Sigurdsson or Gudmundsson, as well as reacting well for some close-range tap ins/headers.
He surely conceeded a goal, but it was mainly because Finnbogasson's shot deflected on Schär, taking the ball to a nearly unreachable corner.
"Willy Wanda is Chinese!!!"
Top

Not a bad keeper at all, but he has nearly no chance to play regular 1st-team football as long as Gulácsi remains at Leipzig, injury-free.

He's good at stopping AND parrying shots (i.e., to divert the trajectory of the ball towards a safe place), but his handling tends to be a bit erratic and he usually struggle to trap shots at first attempts, even for the not so hard-to-deal shots.
I guess Keeper Skills could be even slightly lower. The rest of the standard keeper stats look ok imho.
Aggresion for ooooold-gen PES is also higher on him. He moves forward a lot from being a keeper; dealing in one-on-ones is one of his best traits. Surely low 70s material.

He should probably be looking after a move away from Leipzig, either through a loan deal or a permanent transfer.
"Willy Wanda is Chinese!!!"
Top
Post Reply
9 posts • Page 1 of 1