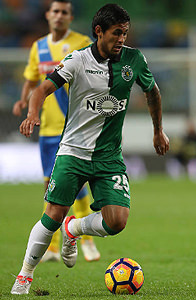 Great long pass to Chavez but before and after that he just dedicated to lose the ball...his determination makes him quite useful in defence but in attack he's just...terrible
Top

He can provide something good to the team in couple of situations but with the ball is a dumbass, dont know how never improved his technique or is just a mental thing, seems pretty nervous making passes and dribbling - if i can call that with those words

- about tw he looks smth like -10, he is pure sta+speed, he doesnt have brain to cover in a good way to his mates, with covering star, plus enforcer card with his sta and speed stats should be ok.
Top

The only thing in which he could be better could be EP, seems kinda agile when he tries (let's emphasize that word) to dribble. Maybe he could be at yellows.
Top

Yeah for sure its stamina is better, very similar to Carlos Sanchez, also bc/tech is medium-low 60´s, and resp is 80 imo
Señores yo soy del Gallinero
Top

Please do it
Top

Imo its spa is very similar to Castillejos

, and the you may att--->def???
Señores yo soy del Gallinero
Top

Update?? Imo was watching some videos and see that your lps/sps is not so low, is somewhat better maybe 77-8 in both (especially in SPS), and I keep saying that the is more att-->;def, maybe att 67, def 62

Given him an update
Top

On loan to Sporting Lisboa

lol, this it's going to be fun
Top

Call me crazy, but he could be useful in Cocca's team
Top

In which role do you think he could work? Cause I just can't see him as a CM over Gonzalez, DM over Aued. Maybe as an energy RSM, or turn him into a RB and become a 2011 clemente rodriguez-esque SB if he can develop his off the ball movement?
"Imagine being this retarded @lucashag you fucking moron, you're seriously trying to write about football and think lingard is a bad player? you're a fucking disgrace, a fucking animal like very fucking south american moron" Relja's burner
Top

Until now played somes matches as rsmf when Cocca starting his second era, then played some matches as dmf when Videla had a bad level and Aued was injured now is the first substitution to play in a cmf role, and always had a bad match or irregular, probably could be a good option for rsb because the level of pillud is awful.
Is the same dude, energetic and stupid, tactically pretty average but fast to compensate his lack of intelligence.
btw i think he is 3/3 awareness player since a while aint anymore a b2b player, his first matches and the first year in Boca was used to reaches the opposite box and then tracking back to his own box, now is concerned in recovering the ball in the midline and make an easy pass, dont know always im confused with the definition of the card and def/att awareness.

Yes, is useful because could work in many tactics and positions, but not as starter.
Top

Is disgusting watch him loosing every ball what he touches, could have 40 in attack and in defense with 99 in stamina

is annoying to see running everywhere without any ideas, his first touch as well as his overall technique is an insult to every player in the world.
Top