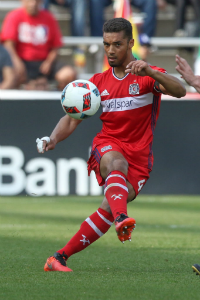 CB must be added. He plays there pretty often.
Top

The "best" CB Chicago could field consistently this season, he is solid in his defensive decisions, a bit erratic in form from week to week. Chicago's problems would have been less had Grant Lillard not got injured, started season partnering Kapllehof and the two looked like a good duo, one fast/mobile the other a physical/aerial giant. The rotating carousel of SBs into make shit CBs and Sweeper Schweini have not really offered a solution to being safe at the back...Even park the bus mode was problematic, no danger created and struggled to leave their own half and still conceded.

TW might be lower, Schweini only real leader back there, Kapplehof not terribly out of synch with backline, offers support in possession (early in season was very aggressive getting into attack, like 76 AGG CB, wanting to get involved be an option/solution to stagnate attack/mid. Probably best coordinated player with backline (save for Schweini), but lacks any vocal attributes, just a silent contributor...lol still thinking for a reason to lower it...maybe Ill change it later, indecision for now.
Top
Post Reply
5 posts • Page 1 of 1