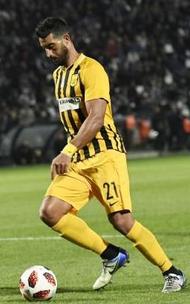 the new Junior Moraes?
I'm against you
Top Absolutely ..
I only hope he won't have Junior's fate ..
So Petrolul has to stay in Liga 1

Gave him an update,nothing too significant,except for maybe his passing that i toned down a little as well as his DA.He is good with the ball at his feet,as he can protect it well, he is decently agile and a good dribbler, which i found made his DA a little deceptive as his close control actually isn't that crazy.Apparently he's lost some speed and agility and he is physically more resilient though i noticed he has very good acceleration for his height.Other than that ,his trapping,off the ball movement and header have been some of his best attributes,althought his best are his Tw and consistency.He's not only been in the final end of passes, he's been commencing Xanthi's attacks and has been collaborating very well with both Vasilakakis and Triadis and has been dangerous/creative in all their games really.He's definitely been their most important player,despite Xanthi probably being the most defensively minded team in the league,and he's done so despite not having many good creative midfielders behind him,he has good supportive players in Triadis and Vasilakakis and good crossers in Pablo and Lucero but noone to directly supply him with goals so his dropping back has been key to their Attack.
Top
Post Reply
8 posts • Page 1 of 1