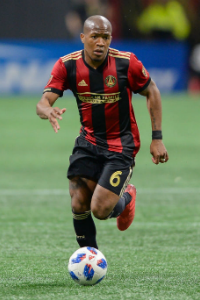 Nerfed Aggression, disobeys direct commands to get involved in attack (basically an attack arrow in old gen PES), sits deep does nothing, too static, this was partly present last season, he less and less ventured into the box, Tata was trying to remould him into a deep playmaker, I dont think he knows how to adapt to that role, he is best connecting play, but he needs to be moving forward into space off the ball or dribbling with ball up the park, not just fucking sitting waiting to become Pirlo, he functions better when he is in tighter spaces with teammates - thus closer to the box - as was seen tonight with his assist. https://youtu.be/Lar7R9b9D34?t=489

The only time he got forward after De Boer specifically called him to touch line (second time in 2 mins) and explained what he wanted from him. Immediately, Martinez has someone to combine with and Nagbe even got close enough to make a shot. But right after the goal he fucked off and went deep again.

I dont get why lost his way, since this was like his natural style years ago, creative passes at edge of box, just too much of a school boy listening to ppl to play against his nature.

...though maybe he is just retarded, as I'm sure he has been told to close down players too, but he still does not do it, he is the laziest player I have ever seen in the mid (no hyperbole), no reaction to passes near him or dribblers tearing his team apart, only once, last season vs NYCFC at home in playoffs he did press, every other goddamn time he lets everyone else do the work. So Response is generously at 55, if we used the full range of the scale he needs to have 5 for Response, level withjh an 8 year old who just jogs up and down with the team irregardless of where the ball is.

I forgot that "Save as Classic Player" does not work!! I think its like 3rd time I clicked it in two weeks forgetting its out of order

Previous set was accurate for 2013-2017 era at Portland with him as winger, I went through all his years there.

Updated to current role as a deep connector/regulator of the match. He's grown into his new position - never became a Pirlo - yet his passing success (and I think volume of passes too) I think was recently stated to be best in MLS in the final third of the field. He can very much make an incisive pass and create - but he holds back often and is the "second assist" man that spurs the play that lets the goal be made - when he does commit himself into the box he can be decisive via a dribble or combination in cracking open a deep defence.

He has improved in defensive phase in being proactive ball winner, does not even attempt freekicks and is out of the pecking order so I dropped it a bit. Consistency increased .. maybe could be even better at 5, no longer over the place here one match ghost another. Shooting lowered, barely getting them on target and been a while since something special from him.
Top
Post Reply
3 posts • Page 1 of 1