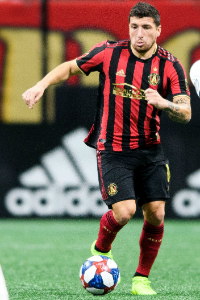 clearly he is the most conservative player in the midfield of banfield, much more ocncerned in making coverings trying to break the possesion game of the rivals, he stand up in front of the cbs and moves around the midfield hounting knees and ankles of he opponents

seriously his tackling ability doesnt surprise me but his response and acceleration makes perfect to be in the right place. On the ball doesnt take any risk, just makes simple passes to cecchini or erviti, as well as his dribbling, is just average but is good looking his mates 20 mts more forward, puts nice speed when makes passes. Btw he is like a bulldog, amazing his muscle mass and besides that, can makes nice turns with his body.
Top

he is like a little bulldog in this banfield, playing mostly like an enforcer guy trying to recover the ball pretty fast and also he likes put long ball to his mates, yeah he is kinda inconsistent about accuracy but at least tries - is remarkable the power he puts in long balls - and tries. He isnt much fast as other dmfs but his burst makes him pretty good to win his battles, making nice slide-tackles and playing simple to cecchini or sarmiento. Probably he needs enforcer card, higher stamina and bw to make him more annoying in the midfield, in other areas he is an ok player.
Top

Been good for Atlanta.