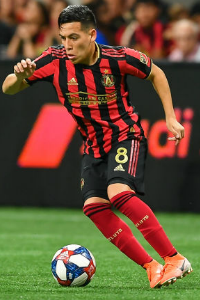 I'm conservative with him, but man he looks so good on the ball. He already scored a goal, playing very mature with only 17 years...international matches, carrying the team forward. Amazing talent...let's give him some time...but he's a really great prospect. Long time I don't see a player in Independiente with these abilities being that young.
Top

Vickingo wrote:I'm conservative with him, but man he looks so good on the ball. He already scored a goal, playing very mature with only 17 years...international matches, carrying the team forward. Amazing talent...let's give him some time...but he's a really great prospect. Long time I don't see a player in Independiente with these abilities being that young.

He carried the team forward against SL, imo he was the best Independiente player by far, he's got a great personality with only 17 years.. his da and agility are great but also showed amazing stamina, recovering balls even in his own field until the 90'.
Top

His close control is unreal, red DA-material, in this aspect the most closest thing to Messi imo.
Top

Ds 81? By no means his Ds last night was a hell was extremely speed with the ball in his feet, the rivals could not do anything to stop it
Señores yo soy del Gallinero
Top

Indeed but I don't want to overrate him...being said that the guy is a serious young prospect. His speed, DA is just unreal same with agility. Played WF last night.

Also his stamina is really something...the guy is constantly running and he doesn't look tired at all.

He should work on his shoting and confidence to do it...same with passing, he's a very capable passer but he lacks timing and choose the right option and being less selfish.

EDIT: Giving him an update and decreased his form. Probably he's better technically and his DS is even better but I'll wait.
Top

In the stadium I thought it was godly but taking into account it was raining, the guy was running at full speed to reach the ball and this control was absolutely great in my eyes. Also he scored another penalty...we should take a look cause it seems he has a good ability to shot them.
Top

Great match of him yestarday, this young guy got a lot of future. Showed some nice controls here and there, btw doesn't He play as SMF ?
Top

Well, he became in a great player yesterday imho. It's a shame we're gonna sell him x very cheap really to a lower league.

I focus in his personality, the guy is always being kicked, and he keeps trying, going forward, running and dribbling everywhere. He got really better in all sense, his passing, his attacking choice decision and his overall performances, he's more mature. The funny thing is he's only 18!!! It's fucking crazy really, played a final being a boss in the team vs a really experienced team and he was one of the best.

I'm really sorry about him leaving, he does need more matches in AFA imo and he'll be an absolutely beast in the future, he still has some things to learn...but taking another time a key penalty like he did vs Libertad is another show of his tenacity.

reydecopas wrote:Great match of him yestarday, this young guy got a lot of future. Showed some nice controls here and there, btw doesn't He play as SMF ?

Idk what his position is, really. He fluctuates a lot, he likes to move all around and he can play RWF, LWF, RMF, SMF, AMF...etc...I feel his best position is LWF but who knows, he's so damn young and good enough.

He's not Aguero and he'll ever be but he's probably the best player emerged from Independiente in the last 10 years (probably with Bustos).
Top Great second half against Flamengo tonight ..and playing as right SMF the more part of the time. He knew how to take adventage of the empty spaces in Flamengo's defence, showing good agility and dribbling. In the firts half, great personality to take that penalty in a Cup Final in Maracaná. Well, he played a great match.
“Our football belongs to the working class and has the size, nobility and generosity to allow everyone to enjoy it as a spectacle.”
Cesar Luis Menotti
Top

Imo deserves better value in att, is one of the best WF in America, its value could be in low greens or near those numbers, as well as minimum increases in shooting, passing, and ment abilities, and deserves better form. 4 / 5 maybe
Señores yo soy del Gallinero
Top


18 fucking years, such a good talent, he became in a player these two finals. It seems now _spa Atletico Madrid is behind him, i'd prefer him leaving in June so he can play some matches of Copa Libertadores, just they did it with Lautaro Martínez. Damn it, Atletico is getting two great young PLAYERS more than talents, i'd expect Simeone making growing up even more, but they both are already great.

I'll make an update and freeze this set.
Top

Atlanta United x 15 millions u$s. Second best sale after Aguero's in 2006. I wish him the best really, he's got an insane future if he keeps growing in his game.
Top

His vs LA Galaxy... https://twitter.com/FutbolyPizarron/status/989883267724783616 some really interesting touches and passes. Eventhough I must say he has some much more space to play than in Southamerica in a first view, he can make disasters to defences with that space when he could get real confidence, he's so much talented.
Top

Interesting to see what happens to him in reality, fifa rates his potential high, absolute beast in game
Top

He has played well when given the chance, maybe his first subbed in appearance he was behind the pace, but otherwise he consistently can make little moments for himself in a match, improvisation that is really good, been getting a few goals.

My only really question is why he is being subbed off so often, a couple times it was tactical (red card/ defend lead late) but he has yet to play a full 90 - like is his fitness still questionable? With 84 Stamina he has pretty good rating for MLS, he is not looking exhausted, maybe just because he tends to fade after the 70th or so - its just an odd thing right now.


A bit off topic , but I've been more impressed with Milton Valenzuela (another 19 year old Argentine) at Columbus - that kid has blown me away - I am shocked he is 19, plays like a veteran.
Top

I was watching the game (the last one) and I realized something I've been totally underrating/overlooking in him. His LPS is quite something, he hits the ball very hard at corners kicks and with a really beautiful curling...sometimes he's not accurate, at all...and that's something I've always criticased about him, but well he's still so damn young and so good at the same time. Almirón and Barco are in charge of dead balls...when the corner kick is from the left, he does it quite well...with curling in "keepers" favour.

Tbh i'd rate his LPS like +15 and wouldn't hurt, that's quite a mistake from my part but probably i focused more in his technical abilities or his tenacity, but I remember him being in charge of Independiente's corner kicks as well.
Top

His passing speeds I have not found to be problematic, I assumed someone in mid-60s has balls that get cut out often, so the LPS makes sense. His SPS speed I too have not found an issue - rather the reverse he tries to be too ambitious and overhits through balls and it is too far/fast for teammate to reach.

The corners, that thing where Almiron and Barco both go at the same time is something they started to do more often in past weeks, to me Atlanta are weak in the air and lack good CBs who can come forward and lack any other player who is a set-piece threat, so they've stopped just lobbing the ball in hopefully, often rather they play a short 1-2 between themselves and force opposition team to bring out a couple of players to leave their marks and close them down, thus make the box less crowded and try to change the angle to make something happen.

An issue with me of Barco has been his Stamina, he has only finished 2 full 90 mins this season, the subbing off continues and it seems to me he drops off in performance around 70-80th minutes in, a similar player in TFC Osorio, creative player who covers a good amount of ground was used like this too where he rarely saw a full match (sometimes did and was on fire) but would constantly removed (till this season he secured a starting spot) - I rated him 78 Stamina for that last season.

I think Barco needs a lower value here, currently he is above Piatti - who has less issues of fading in a match, there are Atlanta teammates midfielders/fullbacks who perform intense full 90 mins who I would still rate mid 80s in Stamina, and having Barco near them is strange. For me I would have him at Stamina 76-78.
Top
Post Reply
28 posts