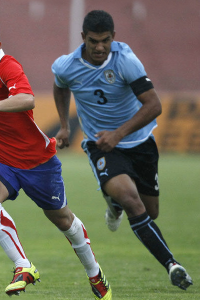 Polenta signed a three-year deal at

Aside from those mistakes, I think he has improved Galaxy's backline over what it was last season, in any confuguration they had tried. There is still room for improvement as a whole unit, but the base is more stable I think with Polenta.

Technique might not be 78 good, SPS has been really nice with his balls from the backline deep into midfield or out to wings, some nice long balls forward.
Top

I think I've never exposed my comments on him, but since I've always heart since 2017 a really hype in all the southamerican media about this guy I thought he was the next big deal. But every time I read, heard, or watch anything from Polenta is something really bad.

He was looked for Boca and Independiente and thanks god they didn't reach an agreement, I think he's a very "rustic" and limited player, typical uruguayan central back but his teamwork sucks. I've watched one of the first matches he played at MLS and his team lost due to a very awful mistake from him. It seems media really overrated him before being anything and the guy thought he was great, when irl he isn't.
Top

Vickingo wrote:I've watched one of the first matches he played at MLS and his team lost due to a very awful mistake from him.

This? https://youtu.be/92WhxNwenx8?t=77 That is the only loss they have so far..a bit soft of a pk, he did not full force kick, pulled back when he did realize he was not going to get the ball, Hedges decided to drop to ground.

Maybe he is overrated, I only seen him a few times, but he is an upgrade over Ciani.

Though Galaxy only kept their first clean sheet last night playing Steres and Romeny (Polenta was out with injury from training), both players came up from the second team, and were also the CB paring at the end of 2018 in last few games where they kept clean sheets - haha maybe Galaxy was wooed by youtube clips and hype to spend big on the backline, when the domestic pair were good enough.

Funny you call him "rustic", I guess simple? Since with this set he looks like Maldini compared to Steres, Skejelvik and Romeny

Vickingo wrote:I've watched one of the first matches he played at MLS and his team lost due to a very awful mistake from him.

This? https://youtu.be/92WhxNwenx8?t=77 That is the only loss they have so far..a bit soft of a pk, he did not full force kick, pulled back when he did realize he was not going to get the ball, Hedges decided to drop to ground.

Nop, not was that one, but still that penalty he commited is quite "innocent" from his part.

Funny you call him "rustic", I guess simple? Since with this set he looks like Maldini compared to Steres, Skejelvik and Romeny

Rustic is said in Southamerica when a player is technically very limited and usually for those CB's who just makes hard fouls, throw the ball away when it comes to them and gets yellows cards easily.
Top

Can you let me know what the error he did was, in case I missed it? I am just confused since Galaxy only lost that match to Dallas so far, was it the back pass vs Chicago? (they came back and won the match in 90th min).

I see the set has not been touched in years (before 2013), aside from some clerical touches, so maybe the set is with "old standards" - I was curious about him when he joined and seeing the rounded set, I found vids like this, https://youtu.be/ok_owMYikRI?t=9 that first goal he scores is nice. I wonder if its cuz Uruguayian league's level making him look better..At least here he already is trying to be more of a ball player, so the intent if not the skill is there to try and control the ball and make plays from the back.

Thanks for the clarification of rustic.
Top

Oriello wrote:Can you let me know what the error he did was, in case I missed it? I am just confused since Galaxy only lost that match to Dallas so far, was it the back pass vs Chicago? (they came back and won the match in 90th min).

He was messing up earlier in season, maybe now calibrated, been doing more of this stuff
https://youtu.be/QqY1MGVc0MA?t=33 pass
https://youtu.be/zgbn5tAhi5U?t=52 helps to make 2 goals in succession
Top

https://youtu.be/AvxvxjjQdyk?t=35 pass from last night - its a stable feature that when ever I see him he is trying things like that - he could do with *Passing star with lower SPA higher SPS, just for his willingness, if not successful execution.

He also had a nice close dribble moment on flank to retain possession under pressure from 2 players, all alone with no support - did not make highlights.

Defensively Galaxy look better with that Giancarlo Gonzalez playing, not sure why these two (Steres) continue to be partners (SKC could had 3-4 goals themselves last night if not for Bingham [and his league leading amount of saves] denying clear goals) - all I can see is that Polenta is capable like no other CB on the team at playing crazy passes to generate chances from nothing and Steres likes to maraud forward and be a goal threat/also stealth threat on set plays.
Top

He's here in Paaraguay to sign his contract with Olimpia
How was his last semester in MLS @Oriello?
I'm pretty sure He'll adapt fast here in Paraguay, Uruguayan players seems to "fit in" here in Olimpia
http://www.abc.com.py/deportes/futbol/olimpia/2020/01/02/polenta-llega-para-aportar-sacrificio-y-trabajo/
Top

Giancarlo Gonzalez was probably the better player at defending, but Polenta I thought brought an interesting skill set for a CB that no other CB in LA Galaxy could offer. He never amazed me in his defensive work, but was solid in his tasks and very good at standing tackles and claiming the ball and transitioning the play forward. He has really rounded abilities, he should really be one of the standout defensive players in MLS - It just never came together for the Galaxy's defence and it probably took away some of the shine he individually had some matches. He has a nice touch, and his dribbling is top top notch for a CB, full of feints and cutbacks and smooth control - he is okay/comfortable at LB really I think if he had a better engine he could have made a career their, as he lacks aerial dominance for a guy his height to be a great CB.

I'm going to update him with *Passing, since that is part of his style from the back, the SPA can be lower as often he just smacks them forward and these can look like near 90 SPS and 50 SPA, just forces them forward and the ball manages to pass slow reacting defenders and turn into a chance. I don't want to go with a crazy rating like that, as aside from his early season blips of giving away goals with bad back passes, his ground passing is very reliable and dangerous - just stylistically it looks raw/imprecise when playing it forward - he can hit first time 50+ meter passes to spring a forward off the front line. His LPA/LPS - more soft precise dropping balls, actually get cut out but are more definitively placed onto a teamates path, crossing I find to be not as good. Seems left footed, making some Outside of foot passes instead of using right when it would make more sense.

I think his partnership with Steres was not good, he needed a more complimentary partner, either some one faster to cover gaps or someone to win everything in the air, Steres does neither well. I think Polenta would be excellent as a wide CB in a back 3, let him play like a pseudo LB in possession and having a player covering any of his gaps, since Polenta likes to engage early/tackle high it would make most sense, and when he randomly enters the attacking third, cover exists in the system. Steres himself likes to make random runs into opponent box - its not a safe set-up.

I don't know why LA Galaxy declined to resign him at end of season, he was one of the better players this season for the team..they kept Jörgen Skjelvik for some reason instead...

I think he should succeed in Paraguay, he is always liable for a red card due to stupid petulance/elbow/being needlessly dirty, but otherwise you get a strong tackler and ball player at the back, relatively reliable.