I saw him the other day against Sporting Cristal. Glad to see him live after many years. He is still a pretty smart striker.
Better to die quick, fighting on your feet, than to live forever, begging on your knees!
Top

Here is Roque Santa Cruz to all of you guys.. Almost 38 years old and He keeps his great level, scoring, attending, fighting, got to love this guy
Yesterday against Sol de América:
Classy definition, and great DA "futsal" style

The other day against Sporting Cristal:

He always was a classy striker in my eyes. I remember him in the Paraguay NT, also in his days in Bayern, then his time in Blackburn. He was very complete with great technical assets, it was sad that injuries kept him away from the field for a long time. Always a delight to watch him play.
Better to die quick, fighting on your feet, than to live forever, begging on your knees!
Top

Do you think he deserves more Heading? Wins most of the balls disputes by air, in general we can say he is all round great using the head. Btw I gotta remark it's pleasurable how he catches the ball, he'd shown perfect yellow recent matches.

Edit: Maybe S18 - Heel Flick adding would fit, tries frequently to do it, I think vs Cerro he tried two times and make succesfully one, both with first touches.

And, one part of the playstyle of Roque consist of pivoting deep to touch the ball, raising teamwork could make him track back a bit?
Top

He can have a little raise yes, he he has 35 header goals just in clubs

https://www.transfermarkt.bo/roque-sant ... 203&stand=
Better to die quick, fighting on your feet, than to live forever, begging on your knees!
Top

Scored 4 goals in the derby vs Cerro today, insane striker, even at his age.
Top

Yes sir, just like wine.. the more I watch of him at the stadium, the more I appreciate his technical abilities.. I mean the guy has played 15 years in Europe, you realize his movements off the ball, his touches, the way of using his body, He's clearly in other level, even at his age He could be realy useful for NT
These are the gifts I made of his Poker yesterday in the derby against Cerro, He totally owned them
First one, great definition:

Second one, again heading against Amorebieta, great placement and without jumping:

Third one, with his left foot and maybe a poor reaction by Carrizo

And the last one, poacher style:

My man it's crazy, wishes to keep playing for 3 years more or so. Now he just stated he's interested to play in NT, seems that playing for Olimpia brought his confidence back.

So yeah, also he raped Cerro as no other player ever had, definitely Er Roque

Last thursday scored a header against Capiata
Another hattrick yesterday, same formula right, left and a header
He's on fire
His numbers this year at the moment:
23 goals in 32 appearances
3 assistances 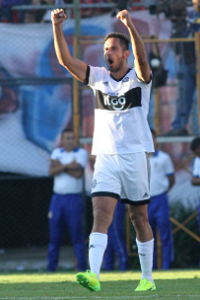 2:30
I just wanna point on that second goal, that pre movement and shot, my fav goal from him this entire season, one of the best goals surely.
Top

Fabrix199 wrote:
2:30
I just wanna point on that second goal, that pre movement and shot, my fav goal from him this entire season, one of the best goals surely.

Yeah, he always was a great striker imo, but when he was in his best moment in Germany and England, he always got injuried. I watched him live against Sporting Cristal in a Copa Libertadores and he still classy af, great technique, great aerial game and overall a pretty damn smart attacker.
Better to die quick, fighting on your feet, than to live forever, begging on your knees!
Top

He's literally destroying the league, such a great striker.

Tbf, some of his numbers could be even better. I'm liking the way he's using his 1st touch, really class.
Top

Roque always had an amazing first touch, I remember classy technique by him in Bayern.Roque best version was in Blackburn when was nothing but monstrous , imho he showed to be a worldclass striker,but he injuried again when he joined City.

This is a great example of world class technique by roque, he never strugles when it comes to control a ball:

And I truly believe classy players like him never lose their ability to show worldclass technique.

Yesterday against Libertad some heading lessons with the professor Santa Cruz

By the way, how on earth could you leave alone this guy in the box being cb? Wtf
Top
Post Reply
108 posts