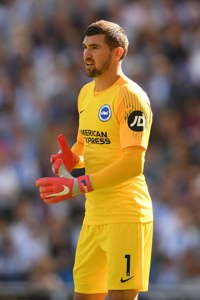 Agree with you. He's more complete GK than Diego Alves but in the last games every shot he gets turns into goal... Form 4 needed.
VCF
Top

Racing Genk for the remainder of this season:

Is there any chance for him to be updated before being moved?
"Willy Wanda is Chinese!!!"
Top

He's doing a fairly good job at Brighton. It seems that the language barrier was his main issue at Valencia; I don't see that sort of problems on him when dealing with Duffy + Dunk nowadays. Inconsisent when it comes to handling, but quite solid as a shot stopper and even better as a sweeper-keeper.

I'm still surprised to see him with extremely conservative passing stats for a GK. He mostly makes wise distribution of the ball from his box, but he also dares to put an incisive, faster tempo pass for counters from time to time.
"Willy Wanda is Chinese!!!"
Top

Does he deserve 88 for def? He’s been very error prone for them and one of the reasons they’re in the danger zone. His gks can probably sit at 80 as well
Top

I don't have a problem with GK82, but yep def looked a few points to high
Top

His TW is what concerns me the most. He's surely good as GK-sweeper most of the time, but sometimes he seriously fails to behave as such, as he's not that vocal with his D-Line teammates in those situations. He's commading when it comes to deal against set-piece occasions, but not that much when the ball is already in play. Specially as SBs of Brighton tend to be quite fragile.
Edit: His passing skills are still with way too conservative values. They are actually a great asset for him, and Brighton would conceed even more goals if it wasn't for his proficient GK ball distribution.
"Willy Wanda is Chinese!!!"
Top
Post Reply
26 posts