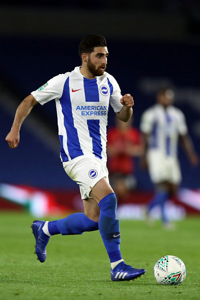 Alright after watching him number of times and his first international games, he has a crazy acceleration and speed.
-I would raise acceleration to 86 (didn't notice it was only 77 before!)
-explosive power to 83
-ball control to 76.
-Shot accuracy is 64? That should be raised to 74 or 75.
-Dribble Speed to 81
His acceleration and pace vs Lebanon:

Does anyone watch him play in Eredivise? This set needs a bit of an update IMO so it would be good if there was other suggestions.
Top

Thanks for your suggestions. I gave him this update for now. He didn't really stand out yet and NEC isn't doing very well, so I keep the set a bit conservative atm.
Top

Gave NEC their first win of the season, 1 assist and 2 goals.

I suggest a higher body balance, he dribbles past players and is not afraid of body contact, does not go down easily.

Top speed should be 85, and a much higher ball control but Im not sure of a value, it could be in the yellows. He's been in the top 100 talents to watch in 2014 and one of the 5 best transfers in Eredivise in 2013. I think his overall set needs some tweaking doesn't it?
Top

mcmattie I think we need to give him few cards to personnalize his style, do you have any in mind?

What I suggest: Mazing Run or Darting Run, definitely Step on Skills.

Once again his Ball Control/Technique should much higher, 84 would represent his great technique.
Top

Ok, absolutely everything with this set is underrating this player. I just can't list everything, this guy single handedly destroyed Ajax today and saved a terrible NEC again from direct relegation in 45 small minutes of play time. How many goals and screamers, goals of the week does he have to score to get an update? His shooting is massively, massively underrated, his agility, his technique, dribble speed, teamwork ect ect... This guy is 75% probably starting at the WC in Brazil, yet this set makes him even useless in a small non-qualified national team. I mean I am repeating myself now and It's like I am speaking to myself since the beginning of 2014, 4 posts without response.
Once again, this guy is going to be one of the world's best players in the future. Did anyone at least watch his match against Ajax since at least it's a big team? This guy should be much higher rated than the likes of Jantscher and others! I really find it so funny when I compare his stats to Jantscher, just too funny.

These stats don't do him justice and it's very weird that he is not watched a lot by the Eredivisie fan members... I hope for a response at least this time mcmattie. I hope I didn't offend anyone of course I just want at least to make a point clear. Thanks man.
Top

Goochanejad isn't a topplayer in holland, let alone against the likes of Sergio Ramos and Pique. Jahanbaksh had a good year but still isnt on a top european level. He will probably go to a modtable club in the top 5 leagues and i dont even know for shure he has the level for that.

In the world cup everything can happen, but they do not have to worry more about iran than morocco for example
Top

Yeah, he needs upgrade in his passing stats and shooting stats. Maybe acc to 84 and ts 85, but its just cosmetics. Attack can be 77/78.

He became topscorer, but that is just because there aren't any good goalscoring players this season in the eredivisie. Mediocre players like johnson(ADO) and Weghorst(AZ) are in the top of the goalscorers. 21 isn't a lot of goals in the Eredivisie. But its a good amount of goals for a winger like Jahanbaksh, i didnt expect him to have this impact.
Top

well, maybe the AZ's playing-style was the reason why he so deadly. that's why all-greens update would be so good for them (AZ trio) right now.
-[P]-[S]-[M]-
Top

First League A (and

Bundesliga, to a lesser extent). But The Seagulls should seriously consider trying to expand their transfer policy elsewhere, once they confirm their Premiership status. None of the players signed from those leagues have made a consistenly good impact at Brighton, with Groß being the lone notable exception. Locadia, Pröpper, Izquierdo, Bernardo,... All of them have failed to perform well at Premiership, no matter how great they did in other leagues in the past. And then, Jahanbakhsh comes to that list.

AZ). One huge problem, imho, comes when scouts don't consider how tactically a potential signing is prepared to play in a way more competitive league. Jahanbakhsh was a prolific winger back at AZ, but he clearly lacks the instinct and incisiveness to replicate well that style in Premier League.

I heavily doubt Chris Hughton has strongly demanded to sign all of those players. They should evaluate changing some names in their scouting staff. Otherwise, they will continue struggling with relegation battles in the future. And, to make it worse, by signing non suitable players for large fees.
"Willy Wanda is Chinese!!!"
Top
Post Reply
15 posts • Page 1 of 1