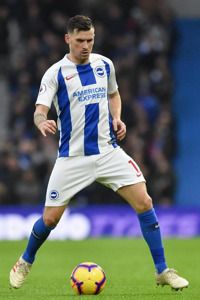 Free Kicks seems to me much better. Low 80´s for sure.
Top

Hayame wrote:Free Kicks seems to me much better. Low 80´s for sure.

For me he is one of the most outstanding new Buli players. Just great passing and overview. Also he is the leader on the pitch with great communication.
Top

£6.5 M for him was such a bargain for Brighton!

His creativity to generate scoring chances on a consistent basis is outstanding. He may still score some few goals from time to time, but it is his ability to put an wonderful, incisive short pass what makes him a valuable player.

His short passing stats (specially SPA) need to be in a fairly higher tier overall.
"Willy Wanda is Chinese!!!"
Top

Amine, just wondering if you could post a little write up on the update and what you’re seeing with him, and the others in general. I’ve been catching most of the Brighton games this season and he hasn’t been too close to his level from last year so far. Further, I think since there’s a good sized Premier League viewership that we can get discussions going on the boards of players like him before just Posting an update and having someone like me have to ask about it after. Generally, I do agree with most of the updates you put together and appreciate for sure the breadth of the stuff you get up across a ton of leagues. However, we have enough people watching EPL for instance that the updates would be better with preceding posts. Especially considering that’s the process the rest of us go through on the big updates. This update though seems quite high. The RLC update as well just kind of came out of the blue since Stu had just done that 2 weeks ago himself and with no posts about it.

Edit:
This makes him a higher rated player in the CM/AM role than the following players: Aaron Ramsey (ATT by 5 and all passing), higher in ATT than Gylfi Sigurdsson + Paul Pogba and tied with Eriksen (plus better shoot accuracy than him by 4 points), and a host of other better players. His shooting accuracy is insanely high and he has the same shot accuracy or higher than Hamsik, Rakitic, Ziyech, Pogba, Saul, Dele, Pjanic, and Nainggolan. He has a singular goal on the season and averages just over half a shot per game, which have all but one this year come from inside the box. One shot outside the box on the entire year and long shot is added. I agree with the speed stats being reduced on him, but these offensive updates turn him into way too much of a weapon offensively.
Top

He's actually a bit reluctant to shoot from mid or long range.
It's not that he cannot score with a decently placed shot in those stances, but his shooting stats still need to be nerfed down a bit, to stress in his tendency to look for the best teammate to assist instead of attempting shots. He still has good asssit and key-pass stats at Brighton; not as impressive as at Ingolstadt, but good enough to reveal how important Groß has become as a goal-chance generator for Brighton, and specially considering how poorly The Seagulls have played in the Premiership down the flanks, either through their SBs/WBs or their SMs/WFs.
"Willy Wanda is Chinese!!!"
Top