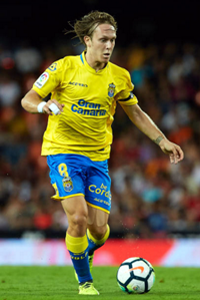 
been mostly used as RMF as seen on this video , cale I do think he deserves bit higher DS ?
Top

yeah, you might be right, given that he has TS 79 and DS 83 makes him too slow on the ball...might need to adjust that

looks like he's Barcelona player from summer , he'll play for Barca B for a year or two before being promoted to 1st team . Still no official words for it but Alen himself did announce his moves along with every single newspaper both in spain and croatia .
Top

i haven't watched him much, but everything i' have seen of him suggests that his most remarkable talent is the natural placement and accuracy/technique of his shooting, he is excellent at putting the ball into the corner with a curler from the outside of the box consistently and precisely. this should be looked at closely, if i was to be reckless as i tend to be these days i'd say pure placement, possibly yellows sa already to me. his dribbling doesn't look amazing, but he's quite quick, very smart and direct, and has pretty great balance really, he bounces off lots of challenges and keeps running fine.
If you don't put effort into your post, i won't put effort in my response.
Top

i'd be wary, this is comparable to a sunday league as dinamo is simply 3 classes above everyone else (bar hajduk this season) and he doesn't even start matches regularly, mostly gets introduced late in the second half after they've secured a lead. he did score a nice brace a few days back with a sublime finish, but his accuracy outside the box is questionable at best, as for strength, he might be a bit stronger but bare in mind that 60-75% of the league consists of alcoholics ala andy carroll and the level of football is crap. barca b will be ideal for him and with a bit of luck we'll see a new Jese in a year or two.

čale wrote: but bare in mind that 60-75% of the league consists of alcoholics ala andy carroll and the level of football is crap.

Just calm da' f$"#ck down, let's see how it goes for him, we can't update just because he's a Barcelona player now.
Top

who the hell was talking about an update?

Are his short passes that slow??? Saw him couple of times on TV (some highlights) , they were not speedy at all , but it looked more than 65. But idk , i dont follow dinamo so i do not know how he performs constantly.
Top

His shooting accuracy is better than this. He's that kind of a player who tends to place his kicks precisely to the very corner, as his shooting power alone isn't nearly good enough to beat the keeper. (I even think that he wouldn't put more power in his shots even if he could, because then his accuracy might suffer. But that's just an assumption.) No matter if he shoots from small distance or outside of the box, he is really a talent and already shows greatness when it comes to situations where pure accuracy is needed. That could be replicated with a bigger gap between his KP and SA, current two points in favour of SA seem to little to show his true nature - he doesn't score a lot from outside the box (if you exclude his pre-senior Dinamo games), but when he attempts you can see that he really aims for that unreachable corner. That is also the main reason he misses, cause to hit that every time you need to have a world class precision. And his weak shooting power doesn't allow him to try more powerful shots with less accuracy in order to make a shot from distance too fast for keeper to respond. Just look at his try against Portugal: http://www.youtube.com/watch?v=242pOCUDMCI (0:46 is where his run is starting).
Robben-like goal against Zadar. He was 16 then. "Doppelpack" versus Rijeka this season - nice finishing for such a young non-striker

I suggest 77-78 for SA, wouldn't go for anything higher, but I'm positive he'll need more raises in the future.
In this video are mostly his pre-senior goals, and it's not the same level of competition compared to where he plays now, but it helps in getting a bigger picture of him as a lot of people expect him just to dribble and assist.
Any thoughts by someone else?
Top

I agree, consistency is very important. Right now he shows that he has the potential, cause that goal against Zadar was, to me, nothing less than 85 SA, or a point or two less with a bit of luck and nice form arrow. And those goals against Rijeka... I was actually inspired by vinnie's comment. So, when I started writing my thoughts, those 2 goals were completely out of my mind. But then Youtube reminded me, and it was like, boom - right in the center! xD On a side note, HNL is not the PL, La Liga or BuLi & the Co. But some of this kid's moves speak for themselves, no matter if he did them in CL final or on a concrete playground.

Time will tell, I hope he'll get enough playing time in Barca B so we can see if he's changed or became more consistent.
Top

so officially he signed for Barca B , guess It's time to move him there .
Top

yep, i moved him.

His debut vs Recreativo Huelva :

After watching some full games and some videos of him in Barca and Barca B, there are some new (and some old) impressions he left on me.
First, his style... He is so much more in the middle of everything now in Barca B, than he was in Dinamo. Both literally (he is a central mid now) and figuratively (game revolves around him more, teammates leave corners, free kicks, loose balls to him). That's positive, that's probably what coaches want from him. If he can handle that pressure in Segunda, he will prove he can step up to get used to La Liga. But I still don't like his selfishness, I wouldn't want him to become that kind of a player. Taking responsibility is good, it builds character, but when there's no need for being a hero, that's called being selfish.
On other hand, his accuracy doesn't match his vision. Which is more good than bad. He's young and he'll get more accurate by time, and you can't really learn vision, which he already has. You can see that in his approach to the game, which is very progressive. Whenever he gets the ball he wants to make something happen, has his eyes on teammates and position of opposing defenders, looking for a pass or a way to dribble, getting ready like a cocked shotgun. That's a real joy to watch. Now, his passes aren't on quite a level yet, but Barcelona school will take care of that. And as far as I'm concerned, he could already get a raise in SPS to 70.
Top