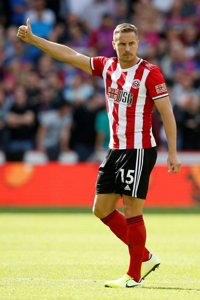 Dolfar wrote:Taking into account height is not redundant at all, the over all package of a players ability to head a ball includes height among others already mentioned above aswell.

How? Why should people who're taller be regarded lower just because they're taller? Heading is about the ability to place a ball with your head, look at some of the masters in the game. Chamakh is 185 and is regarded as one of the best in the game, hardly that much taller than Jags. Being smaller has nothing to do with ability and you know that!

Dolfar wrote:You think the brief list of players I made above are so prolific with their head that it warrants them having these stats?

Defensive heading is a different animal to accurate goal scoring ability with the head, if he's going to be handicapped because you're idea of a player's heading ability is based on a defenders goal tally at the end of a season then I guess we should leave it as is...

They're more prolific, no? I don't even know how you can utter Phil's name in the same vein as some of the players you've compared him to:

All of these players are leapyears ahead of Jags in regards to heading, don't deny it, can you honestly say he's better than one or even on par? A goal tally, as well as attacking threat in the opposition should definitely be taken into account when heading, defensive heading is a far easier facet of the game to garner, trust me I've played as a CB and a CF, scoring a header is far more difficult than to just loaf it away defensively, anyone who's played the game knows that. Look at the ladder and look who's on top, Vidic and Terry, they're there because they're able to pass the ball with their head and place a ball perfectly, even in attacking positions, I think you're underrating how important the offensive side of heading really is in judging a players heading ability. Even at Sheffield he was renowned more for his shooting than his heading.

Dolfar wrote:Everton play to their strengths on set pieces and aim for Cahill, Fellaini and Saha, for this reason alone, Jagielka doesn't often score.

Because they're the players who're adept at challenging arially, no?

Dolfar wrote:As for the so called clanger at villa, are you referring to the own goal he scored when he was pushed in the air by Carew? Hardly a moment to compare his heading ability...

Really isn't all too great against Villa is he?
http://www.youtube.com/watch?v=rFYbfLeW_wY

Dolfar wrote:Try playing with him in-game with the current stats and tell me he's dominant, he's nothing of the sort.

Which is why I've agreed to a raise in Jump, and I meant dominant as a defender, not in the air. I'd agree to the raise in DA by the way.
Top

Look at the ladder and look who's on top, Vidic and Terry, they're there because they're able to pass the ball with their head and place a ball perfectly

You make it sound like i'm asking for the world... i'm asking for an increase in heading because I believe that Jagielka is better than Mancienne at heading a ball. I would say he's on par with Toure.

They're more prolific, no? I don't even know how you can utter Phil's name in the same vein as some of the players you've compared him to:

All of these players are leapyears ahead of Jags in regards to heading, don't deny it, can you honestly say he's better than one or even on par?

To even mention the word prolific with any of these defenders (bar perhaps Vermaelen) is laughable... Seriously check their records dude. Why is it so ridiculous to mention Jagielka in the same breath as Craddock, Toure, Cahill? He's an english International ffs, does that not make you think he must have some sort of ability in the heading department, its part of a center back's job and to get into the England team must mean he's fairly good at it.

Because they're the players who're adept at challenging arially, no?

Well yes and no. Everton happen to have probably the two most dangerous players to challenge in an opponents box in the premier league with Cahill and Fellaini, why wouldn't they look for them?! so again, your point seems weak.

As for bringing up the two mistakes against villa (the only two he's made since he's been at everton) is not even relevant, you've never seen Terry, Vidic or Ferdinand or any top defender make a mistake or score an own goal? Your grasping at straws to even bring it up in this debate, it brings no strength to your argument at all.

I'm really not sure which side to take in this tbh, anyway on separate note I believe he deserved higher DEF value before he did his knee and nothing I have seen since has made me doubt that
Top

I agree Chelseakid08 but I am unsure of the actual value, i'll let you suggest one and go from there

Keeping in mind some of the recent talk concerning distinguishing between Acceleration and Top Speed I noticed Jagielka managed to chase down Modric for a loose ball, after Luka's initial burst of pace. Admittely it was close to the end of the game and Modric presumably put in a harder shift then Jags, but I still think this serves as an example.
Everton F.C.

His main strength is definitely his response. When he tackles they are clean and well timed. There should be at least a two point separation between his DEF and RES. His positioning is often suspect. I'm not sure why he has such a high value.
Top

DM can be removed as a postion for him. He's only played at DM a handful of times since joining Everton, mostly due to injuries in the squad, and has been quite woeful. SB could possibly be removed as well, or at least made optional as it is very rare to see him play that position these days. If SB is to be kept as a position though, then Side should be changed to Right as I don't think he's ever even played as a left back before.

Now looking at the stats;
Attack: I'm pretty sure this value was based on his Sheffield United days when he often played in the centre of midfield. As a centreback he's really not prone to goal scoring in the box through good positioning, though he currently sits equal second for this stat as a CB in the premier league. I honestly feel that a value of 60-62 would do him justice.

Speed stats: I feel like he's more of a case of TS>Accel as I've mentioned before in this thread. I'm not 100% sure but maybe a Top Speed of 82 and an Acceleration of 79 would be a better fit.

Shot Technique: He is quite a good shooter for a centre back and he's shown on occasion this season when getting foward for a set piece that he's arguably more dangerous with the ball at his feet than in the air. Having said that he, again, leads the premier league CB for ST. I'm not convinced he's that much better, if better at all, than, say, Agger. Therefore I suggest value along the lines of 68-71.

FKA: Honestly, I can't remember him taking a free-kick so I can't really say much there...

Aggression: Compared to Distin he's the less attacking mind of the duo. Still, he tends to get foward at times, but not too often. A value of 62-64 would do. (At the same time Distin can probably be raised to 66-68)
Everton F.C.

How about a slight boost in def? His positioning is pure class.
Top

A year or two ago I'd say he definately could get a higher DEF/RES rating, but since his injury he hasn't been playing to the same standards, although recently he's started playing a bit better. Distin has probably been our best and most consistant defender this year and it's probably best to wait at least till towards the end of the season to see if Jags can maintain his form.

I don't think Jagielka is this good a passer either, he much prefers to just hoof the ball upfield than play a safe pass out from defence. Plus on more than one occasion he has misplaced simple passes. If Pepe is on 75 SPA, then Jagielka can get no more than 74 imo. His long passing, even though he loves to do it quite often

is similarly average and is nowhere near Heitinga, who can display some quality, accurate long balls upfield and he's only 1 point above him. I'd give Jags 76.

He's got a better header and jump than this too. He aint the biggest but he's got a decent leap on him, I have him on 85 jump and also the amount of headers he wins defensively is also testament to his skill in heading, 79 is pretty absurd, he should be 82/83 imo. Also, DA - 72 and I'm not too sure on speed, he seems pretty fast in the first few meters at times, not sure. The guy is a leader too and has struck up great partnerships in defence with Distin and Lescott before him, certainly shouldn't be below Lescott in TW.
Top

I, again, can pretty much agree to all these changes.

My only concern his heading, which I'm not convinced needs to go so high. (Perhaps a value along the lines of 80-82 would suffice?)

And you're right about Distin being our best CB this season. I have to say that Jags has been quite out of form of recent times. His form, along with Arteta's, has been two of the biggest reasons as to why we've been struggling this season season. I good (fit) striker would help though

I've heard that he has been carrying an injury until recently for most of the season which gives me hope that he can return to his imperious best.
Everton F.C.

Regarding an update this is what I'd change:

I've already suggested that his attack should sit at level similar to the value you've suggested, as well as expressing my opinion on his header stats. All in all I agree with your suggestions

Anymore thoughts on these suggestions, they're good in my opinion.
Top

I'd agree with them seeing as though they're my suggestions

If Alan Tate (Swansea) has GK as one of his positions (KS 60), why doesn't Phil has it as well (KS 65)?
No GK experience since leaving Sheffield United?
"Willy Wanda is Chinese!!!"
Top

maybe because I'm the only one crazy enough to give a player gk, and i'd attract attention giving it to jags....
Top

Phil wrote:Regarding an update this is what I'd change:

These are pretty reasonable, but I'd go further with the lowing of his passing. He's really nothing special at all for a CB. I honestly thing Yobo and Distin have better distribution abilities. How he ever played at CM for Sheffield United is beyond me.