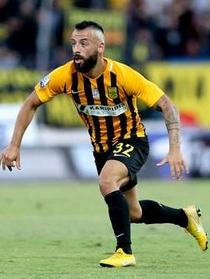 Report by Mr. Houy
Siopis has been the key midfield player for Panionios this year,running all game ,his role is purely defensive,basically destroying offensive play and he has been very good at it,his attacking contribution is non existent but that's his role which is very defined in Ouzounidis system.Simple passes,nothning special in technique,not super weak despite his small stature.

hey there i am on the title ,what an honor

,i like the tweaks,Sta is deserved ,meant to give him a higher value in my set,my only though is lower LPA,because i have not seen him cross a lot,but maybe it's a matter of the games i watched.
Top

hehe, you deserve it, you helped me a lot with your posts and sets suggested. STA and LPA were in my notes, ive seen him tried long range passes with good accuracy, no swerve btw.

This guy gets better every time i watch him,his level today against Pao was crazy,his Sta,Ten,TS,Def can all be a couple of points higher,also Spa at 72-73 is deserved i believe ,he is safe in his short passes but efficient enough for that value.The two most important things i want to address is his BC and Def,his Bc looked 75ish to me,he is not lacking at it,his Da doesn't need to be higher but BC is important for his efficiency dispossessing and passing quickly that he is great at.Most importantly Resp looks 80+,his a surprisingly clean tackler as for his Def,but most important is his positioning in the midfield and how quickly he gets on players ,i swear every time a Pao player got the ball in the midfield he was on him,total machine .
Top

Thanks, gave him an update.

no problem,i am really interested to see how he progresses,he doesn't get enough recognition though,even after the yesterday there was more talk about Bakasetas while he was by far the best on the pitch,he is only 21 too,very good talent.
Top

He has to be called in the Nt where there's a lack of good Cms,Dms and he has been so good,a machine in the midfield,other than my usual praise for him,he has improved his Short passing,he has become important in transitional play,I can see his Spa closer to 75, Att Aw can be raised to 2, his role is the same but he has stepped up his game to more than just enforcing.
Top

watched just the highlights vs Panaitolikos,but he was playing more advanced,he was involved in attack significantly and he had 3 decent long shots from good positions and was covering the ball well,havn't seen him this year but it's really interesting to see him contribute more offensively.
Top

picks up the first pass, 1-2, nice pass, goes in the box and he almost makes the header

combines and reaches inside the box but airs his shots

again goes high for a shot

Past his injuries last season he's returned to form with Aris putting on some defensive clinics. He has also been venturing forward surprisingly often to follow the game, mostly following through on his supportive movement from the midfield. He capitalizes on his Stamina more freely with this new element in his game. At the same time he makes the pairing with Matilla who's a passive player works as he takes on all the defensive responsibility as an enforcer, though their lack of strength makes them vulnerable against even decently physical opposition. The Sta he displays game in game out is just exceptional, 90+ . He's wasted in Greece, he is of the handful players that could make it at-least as an option in mid-card teams in a good league on account of his athleticism. I hope he tries his lack there soon.
Top
Post Reply
9 posts • Page 1 of 1