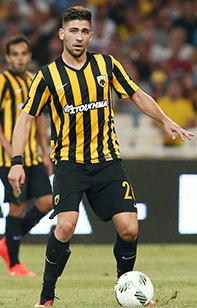 Amf as main position,SPA 78 and LPA 77,Resp should be closer to 75 as should DA
Top

Raised SPA and SPS (imo he could have 80+ but lets see)
He is playing like AMF/SS, dont have clear opinion yet to tell more for the rest.

Agrre to all also tw ten are really poor rated.Fantastic performance with a hat trick against Skoda Xanthi.
Top

2 notes after yesterday,the gap between DA and DS should be significant,79-72.His KP is even higher than this and he generates force with little effort,maybe 87-88,also long-rage drive.
Top

another rocket today,you should take a look at the long-range drive card i suggested,it suits him perfectly.
Top

Haven't seen something similiar to long range drive from him. Do you have any video?

never mind actually,i read the explanation better,thought it was a long shot infused with great curle,not that trademark curling shot Ronaldo and Del Piero use.
Top

Based on where he's been playing here, i suggest dropping his Agg to 75 top. He rarely goes beyond the final third,also i think that's important for his shooting which i dare say is more accurate than this,but with that he would play in more advanced positions and scoring from inside the box more,while in reality most of his goals are long shots.He has good placement,which is evident on how precise his long shots are as well,he really knows how to position his shots which is impressive since he hits with such power,so i suggest giving a little boost in SA.Another adjustment is his DS,he doesn't move with the ball a lot ,he makes quick passes and key passes when he gets in good positions ,but he is definitely not someone who carries the team in attack,advancing with the ball,that style is helped with low TW,but i also think DS at 74-75 top should be given.And Pk could be given a boost as well,he relies on power but i think he can be given a value more than 70.One last think, is his Lpa this bad? i think he takes the corners at Panionios.
Top

Till now he was far away from the player we saw at Panionios. Droped form and many stats. previous set copied and saved as Panionios player into a spoiler.

He became a valuable asset to Aek during the course of the season, a much needed fourth attacking outlet beside Livaja, Lazaros and Araujo.

As for the set, i think he needs a boost in Aggression and a tweak to his shooting stats, a little more emphasis on his constant shot power and less on accuracy. I see him at Agg 81, SA 72, SP 87.
Top

Increased Form and Ment. Aside Livaja he is Aek's creative player that can make something dangerous in attack, with more impact than Mantalos and with the team's other attacking midfielders and wingers far behind him.
Top