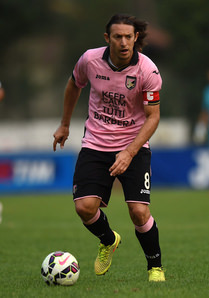 After more than a decade in Serie A/B and more than 300 games played for Sampdoria, Palermo, Atalanta and Reggina, together with captaining different teams on numerous occasions, Edgar Barreto has become a veteran of Italian football, and if not a legend, then some kind of a quiet hero, admired both on and off the pitch - by fans and managers alike. Barreto is a box-to-box midfielder, tough in duels, hard in tackling, boasting a wide range of passes and a devastating shot, while also being dangerous from dead-ball situations. Present set attempts to present him from the arguably most productive period of his career when he was a dominant presence in the heart of Palermo and Sampdoria midfields and arguably one of the best box-to-box midfielders in Italy.

The set is based on his current set, changes that happened over time, comparisons with some other players from the league, and, of course, evidences of his abilities from videos (which are actually very scarce). In the mentioned period Barreto played 30+ league games every season with around 84' on the pitch per game (while also being a captain), hence higher scores for stamina and mentality. He is noted to be strong in duels and showing good awareness of lose balls. Furthermore, his pinpoint passes from deep (where he reminds me of Gago) required a higher value for SPS to be accurately represented in this set, while there was a slight increase in his long passing as well due to good deliveries from corners/ long free kicks. Some 16 assists in total over the last two seasons with Palermo (which is a lot for a midfielder sitting that deep) also support this case. Devastating shot is his well-known trait (which was also reflected in previous sets) and while I could not find many videos of his abilities, here's the one to showcase his tremendous shooting power (https://bit.ly/2L9onri), which I believe to deserve a high value of 88. A small increase in his shooting technique is due to the fact that he scored some goals from tricky situations (e.g. with his back to the goal), and especially after corners when the ball would ricochet of the players and get to him for a half-volley or a knee/ heel tap in. Some previous sets gave him high values for free kicks of which I am not really convinced, although he was the side's main free kick taker in most of situations. Despite his strong shot he is able to put some curve to his balls and although in most situations he shoots almost straight at a goalkeeper, the ball somehow always manages to curl sideways (away from a goalie) which makes it harder to stop. He also shows a good teamwork and leadership abilities.

This set is in no way finalized and I would truly welcome your help for improving it.