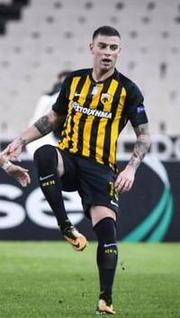 Very good and very young defender. At a brave old height of 187cm he is nothing special in terms of height for coming of age teenage defenders, but although he doesn't stand out much physically, his prowess in defence and natural ability on the ball more than make up for it. Confident and assured on the ball, Ćosić has the perfect mentality for a defender. Virtually unbeatable in his own box, he can also put away a few at the other end, as he's shown at youth level in Russia.
His tackling is second to none according to Serbia's U19 former coach Aleksandar Stanojević ( now FK Partizan coach ) who has nothing but praise for the defensive prodigy. Now, he is back in Red Star, from where he was taken by CSKA Moscow, and immidiately in 1st squad.

He was CF before five,six years,and he showed in match against Sloboda last season to he is very solide in attack when he scored in combination with his new-old team mate Mijailovic.
I think to his ATT should be higher for 3,4 points and AGG for few points,too.He's sometimes trying to score after corners,too.
Top

Defence , Teamwork and Mentality. All deserve at least a 2 point decrase.
Top

Back to CSKA... There're some speculations to he will sign for Pescara.
Top

Well, how's he doing there ?

BB isn't higher then 80,jump max could be 78,and header is too high but I don't know exactly how value he should have in that...
Top
Post Reply
7 posts • Page 1 of 1