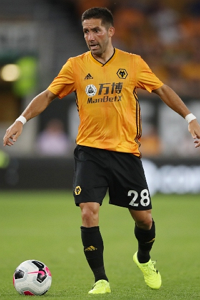 Stamina should be in the 90's and I also think his consistency could be 8.
What do you guys think?
SPORTING CLUB PORTUGAL
Top

if this description is accurate i say go for it

Not so sure about the consistency, but it always baffled me why his Stamina wasn't in the 90's over here. 92 is the least he deserves, the way I see it.
Top

Viriato wrote:Not so sure about the consistency, but it always baffled me why his Stamina wasn't in the 90's over here. 92 is the least he deserves, the way I see it.

That was the value that would fit him more IMO..
About consistency, why should he be far from the best there? Of course, no Zanetti but if there's anyone who deserves it in Portugal it is him.
SPORTING CLUB PORTUGAL
Top

flamini is 92 too so there is no problem
Top

element wrote:flamini is 92 too so there is no problem

I've looked up a few others. If Ronaldo has 7 in Consistency and the same value is being suggested for SimÃ£o, then Moutinho does deserve an 8.
Top

I have no problem with 8
Top

His goal vs. Bayern was f*cking amazing. That shot was so finely stricken. Are his regular shots like that? Because if they are, his ST should be raised right now!
Visit my alt thread: http://pesstatsdatabase.com/viewtopic.php?f=1011&t=25348
Top

bitz wrote:His goal vs. Bayern was f*cking amazing. That shot was so finely stricken. Are his regular shots like that? Because if they are, his ST should be raised right now!

wasn't it more placement than shot technique?
I'm against you
Top

Nope, he usually misses long range shots and he's only decent at shooting from tight angles.. it could be green but I don't think he deserves it tbh.
SPORTING CLUB PORTUGAL
Top

i think his SP should go up, he shoots really hard, enough to deserve low 80's
"You do ill if you praise, and still worse if you reprove in a matter you do not understand." - Da Vinci
Top

Shot power updated to 80, he is learning how to shot.
Top

maybe I'm wrong but he always struck me as a player who can be really quick with the ball as well?
I'm against you
Top

Dribble Speed and Teamwork could suffer a review.

Dribble speed as he knows how to control a ball and progress with it, not only just with technique but also with speed. A perfect example of this logic would be a goal against Braga a couple of seasons ago, where he dribbled past 2 opponents with great technique but never in a low gear.

Teamwork as he always tries to get space to collect the ball, very perceptive of the various passing lines in a specific play moment. He is, without questioning, a very smart player. When he plays in a central position (and not as a fake side midfielder) he is mainly the "lighthouse" of the team, always collecting passes and fixing his team flow. His companions trust him to start the offensive moves.

What do you guys think?
When the seagulls follow the trawler, it is because they think sardines will be thrown into the sea. Eric Cantona
Top

well tbh i don't see him enough, but in the game with those stats he sucks, he is useless
Top

Now seriously.. a player will only be useful if he dribbles past half the team and scores a thunder shot? I don't think you've ever played Moutinho or you'd see he's more the less everywhere and a guy that will chase you till you give up from running.

Now.. Classical.
Great reply, with quality and you do have a point. He's capable of pulling off good moves on the ball and with pretty nice speed but I don't think he does it regularly.. I mean, he doesn't always use all his speed and we must remember that his nice speeding stats will still be very important in his DS.
I just think putting him into yellows could be too much comparing to other midfielders in the league.
In TW, I definately agree with you. He's 4 points behind Lucho here but it's an unfair view.. he could probably be boosted one or two points here but element should take a look before.
SPORTING CLUB PORTUGAL
Top
Post Reply
124 posts