by jurgens
After a long time off from actually playing pes, and mostly just creating and editing players, I'm back into playing master league... which is the main thing I like about pes in the first place.
Figured I'd attempt to share some of my ideas and players I find interesting etc. Dunno how active I'll do this though as it's more work than I'd like to keep up with.

Quick bit of info about my game in general:

I play pes 2011. I absolutely hate the fact that pes since the beginning completely overpowers dribbling, so it's just always been par for the course for people to get on the ball and abuse dribbling. Since I started playing pes and being a pvp freak since I was a kid, this was a massively discouraging factor to me. But in pes 2011 you have the stumble and catch up nerfs to tone down dribbling, its honestly way over the top and makes the game infuriating, but it does take care of that abuse and forces you to play the game in inventive and interesting ways. The other thing about pes 2011 is that in spite of all the annoying nerfs that go too far, dribbling is actually possible in pes 2011, it's just very difficult, you have to have complete awareness of the overall situation and know what you can and can't do in the present moment based on a multitude of factors, mostly to do with body angles and how to avoid the current pressure being applied or incoming. It's difficult and you are on borrowed time, so pulling it off is the most satisfying I've found in any pes ever

It is by no means perfect, and in many ways its god damn awful, but thats pes in itself. I've just settled on this.

I play with a game play patch and a difficulty patch. My game is 2011, so a lot of stuff is out of date, but a lot of it is fully up to date, all of the top teams are close to 100%, the lesser teams in the top 3 leagues are pretty updated and most keys players are there. I don't like to throw away perfectly good players and I like to have as many choices as possible for players, so all of the original pes 2011 sets are mostly present (some retired) in fringe leagues or other European teams. this also means that there is a massive amount of great players, so every team ends up creating a pretty nice line up because of the wealth of variety, which helps keep the difficulty level up.

The main thing I care about is interesting/unique/weird sets. I don't care so much about having a team of perfect players, I like sets with glaring holes in them, players with real weaknesses, players with average sets with some stand out points, rather than having a team of perfect players, I rather have a team with interesting players that I've grown fond of and like to try make them play together really nicely. My goals change around as do my playing styles, so if I'm trying to adjust my team around to compensate for a weakness, I may end up changing the whole dynamics of the team, though I'd usually like to avoid that.

Regarding sets; I am usually much, much harsher than PSD so I'll typically have far less tw/def/ment etc for players in fringe leagues or unproven players. I love konami sets so there is a tonne of them up to about 2014 (after that they fucking suck) and lots of old sets. From then on its mostly all my own sets or sets I've modded off PSD. I've also started to follow fifa stat trends through out their games, so there is quite a few players influenced from there sets, hybrid sets and what not. Mostly I'm just collecting and making fun and interesting sets.

Oh, I'm very picky and weird with my teams and make up a lot of stipulations on what I can and can't do. I like to try avoid getting stars and world beaters, but inevitably it happens here and there. I try to avoid it though as the more I get the more I lose interest. I really just want to find interesting sets and niche players and adopt them into my team, if I can create a perfect role for a less than perfect player, I'm much happier with that than putting 3 world beaters in midfield and dominating. I also like to search for players that fit the current idea I have for my team, thats one of the best things in pes for me. Nothing like finding a diamond in the rough, or turning a supposed average player into a top tier one

Lastly, no classics or classic teams, no player development and starting with default ML players and a global -1 on forum, 7 is the max on my OF and basically non existent, highest difficulty of course.
All coaches and advantageous facilities are on the absolute minimum, I don't want any bonus from trainers to stamina or fitness etc.
Playing with Atalanta B.C. in serie a, nothing to do with their current season in reality, just been planning on using them as my next serie a team for some time. Currently in season 3 and have moved on from the default players and started to build the core of the team.

It's also not surprising to see so many strikers with godlike values in PES 5/6, because the 00s was truly the era of god-tier strikers.

Was it really though?

I mean, it's so easy to look back and think, wow trezeguet and crespo and remeber their best momemnts. And forget the fact crespo had two seasons scoring 20+ in the league, and then completely dropping and never coming even close. Trez broke the twenty mark 3 times, but had many seems hanging much further back with 14 goals, etc. And what about Gilardino? He had two back to back 20 goal seaons, and then completly fell off as well. And his stats back then, were before that fall off.

Henry/RVN/Ronaldo we're all a tier above, and proved their worth over and over again. But the others? I don't buy that they are truly that much better than todays.

Just look at Higuain, you look back at his records, and think... god damn, thats a great consistent striker. But then he moves to serie and enters god tier, and hits 36 fucking goals and breaks the record.

Or Aguero. Agueros about to go onto his 6th season breaking 20 goals in spite of being plagued by injuries.

Or what about Dzeko? Consistently at the 15 mark sharing time with aguero/tevez, broke 20 marks 3 times, and broke many records last year in serie a.

Suarez is about to go on his 7th season breaking 20 goals. I'd put suarez over any single one of them from the 2k's.

Kane is on his fucking 4th season in a row breaking 20 goals, 29 last year.

Icardi is about to be in his third season breaking 20 goals, and hes only 24 now, and hes a poacher.

Lewandowski is going on his 7th/8th season? Breaking 20 goals, he scored 30 league goals back to back.

About this, you shouls also consider that the goals average per match back in 00s were way lower than now. For example:

In those 2 seasons, there was only four teams that reach the 60 goals mark: Lazio 2 times, Milan and Roma. And now:

14 teams brake the 60 goals mark in this period. Also, the team that reach the most amount of goals in the 98-99-00 period was Lazio with 70, and in the 15-16-17 period 9 teams brake the 70 mark, with Napoli and Roma breaking the 90 mark in the 16-17 season. In Premier league occurs something similar, with the exeption that United brake all the records in the 99-00 season. In La liga taking away Barsa and Madrid this "evolution" doesnt seem so dramatic, but those 2 teams are close to 120 goals in the 15-16-17 seasons, totally unthinkable back then.

In this era, the financial strength of certain teams pervert every stat in terms of total amounts of goals scored or recieved or total ammount of points (serie a had 18 teams back then, but with 20 victories and about 70 points were the mark that champions reach, nowdays champions reach 90 points and 30 victories). All of this talks about inequality (the weaker teams are way weaker that then; it is imposible nowdays that a really good player stays in those teams) boosted by financial resources. Something different is the consistency of players you talk about. But, again, consistency is also determined by inequality (and the strenght and durability of each proyect), in a quite lesser extent. Not saying that what you say is wrong at all, just wanted to state that one should strongly consider this era differences in these kind of comparisons.

I've purposefully stayed out of this thread because i think it's brilliant and i don't want to derail it in anyway, but reading what you've said here i thought your data must be wrong since i did all of these goals calculations a few monthes ago, and your statement came off as inaccurate.

Look at this chart from my "Adjusted Goals" thread below: 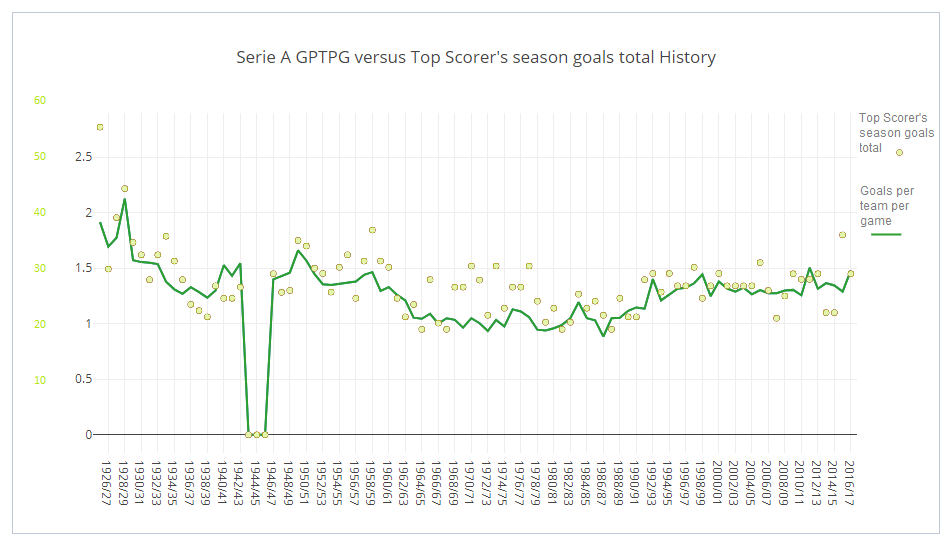 My conclusion was that the scoring frequency in the Serie A actually has not changed almost at all in the last 25 years, back to 1992. I think you looked at the goals total and took that for frequency, but remember that Serie A still played only 34 matches in a season up until only a few years ago when they finally changed to the 38 match format back in 2004. So the 22 goal or 25 goal seasons of that era were equivalent to about 27 or so goals today.

When you take that into account, there's very little difference if any between strikers of Serie A's "golden era" and this current modern era statistically.

This supports the theory that modern strikers are being undervalued due to things unrelated to their performance and ability.

I also have a new post i will be submitting soon that talks about competitiveness in the major leagues through history, and i actually don't agree with your interpretation regarding how the weak teams have become weaker based on the data i compiled.
All times are UTC
Page 5 of 5
Powered by phpBB® Forum Software © phpBB Limited
https://www.phpbb.com/