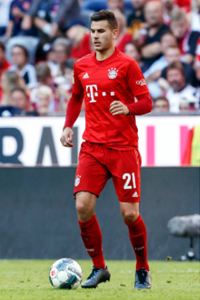 I think Lucas is an atypical defender whose main asset is imo speed. He is damn fast and agile for a defender, albeit rather weak. It's easy to see Lucas falling down when struggling with strikers but he does make up for it with very good anticipation thanks to his surprising nimbleness and speed. He's a rather concentrated CB who does not mess around and his fuck ups are but scarce for such a young defender. He has got okay passing too, but not really adventurous. Overall a very good defender with huge room for improvement. A talent I can't wait to see at its full potential

Yup he is. I forgot to change his default foot. Thanks!

I'd say he's slightly faster than this over long distances, but a bit less explosive than ACC 80.
The TS/ACC gap is not so great as in the case of his brother Théo. I'd rate him like TS 85 ACC 78/79.
He's useful as a sideback, but not fully adept to that position in tactical terms. I know he played as RB against R. Madrid in UCL, but he looked quite unsettled when he had to face CR7 when cutting inside from that flank.

Even if Aleti cannot sign new players until Jan 2018, I don't think he will have more 1st team football chances than in last season. I just hope he takes those few chances he will be provided, for the best.
Last edited by KeyserSoze on 2017 Jun 29, 11:23, edited 1 time in total.
"Willy Wanda is Chinese!!!"
Top

Well the example is a bit unfair imo. That a young defender such as Lucas, whose natural position isn't SB and facing C.Ronaldo, one of the best players ever, looks 'unsettled' against him is only to be expected IMO. I'd say he is a more than suitable SB. If anything i'd say he did a very good job when he had to.

I tend to agree on TS and ACC though.

So far this season, and letting aside small flaws Godín may not have when it comes to pure defending, Lucas has been Atleti's best defender this season. He has proven with time he's no flop when playing as a sideback, and as CB he is as unique as he is amazing. Faster than most CB, actually pretty good on the ball skills and passing. His control of the ball is pretty decent as well. Also, he's a CRAZY slider. I'm going to tweak some values. Nothing too big, mainly DEF up (imo it's about time), and a little up or down in some other key stats. Was going for orange jump, but not sure yet. Just going to leave it on the edge.

I'm liking his role as LB. He has played there several times and I've been waiting to see a bad match from him that showed he isn't truly a sideback but yea...I keep waiting. His offensive contribution is actually pretty decent also, and his DA has proven to be pretty surprising. Great season, brutal player unlike his headless chicken of a brother.

Fixer wrote:I'm liking his role as LB. He has played there several times and I've been waiting to see a bad match from him that showed he isn't truly a sideback but yea...I keep waiting. His offensive contribution is actually pretty decent also, and his DA has proven to be pretty surprising. Great season, brutal player unlike his headless chicken of a brother.

he played as LB yesterday vs Italy, had a really good match, penalty on him, good energy, solid speed, who would've thought he'd look this much better than Theo
Top

First time I really saw him. Nice fighting spirit indeed. Could even start several games in the WC I think against teams with dangerous winger. The most surprising thing was his offensive duties, didn't know he was able to.
They have eyes but cannot see; they have ears, but cannot hear; they have tongues, but cannot speak. They are like cattle.
Top

I kinda expected him to be more defensive, but he offered quite a lot offensively, honestly, since Mendy didn't play for so long, I can see him start at LB, gives you a much more security defensively
Top

he's been brilliant at the World Cup, he's amazing as a left back. Might just add early cross? also Sta could come up

Fan favorite already! Not even a year ago he was saying he felt more spanish than french to put pressure on Deschamps, we were all outraged. And now after 4 WC games we just cant imagine not starting him. Thank you Godin, you raised a proper Uruguayan player. Such Grinta!

What impresses me the most is his defensive response on 1v1. Incredibly hard to go through him for wingers, even pacey ones. He knows how to harass them. Leaves no inch of space.

What looks to be underrated in this set: att, agg, balance, mentality, stamina. Maybe curling and header but im not sure for those 2.

I'm seeing another post saying he isn't very strong but really i have to disagree. Maybe he relies more on his speed and reading but he's rock solid.
Top

well his set was made for his CB position which is his main, we should be careful and wait a bit before updating things such as ATT, AGG and STA too highly ...he's primarily a CB, he is going to play as a CB next season most likely, and I do really love him as a LB but still...

He isn't really that incisive in general, he has become more attack minded with time, as he used to act more like a side centre back at first which is only normal. I insist on being patient when rating his LB skills, I'd like to raise STA as suggested, and perhaps BB too as you say (not sure how much, I was thinking on something around 79/80...can't see him having more)

Also his speed keeps impressing me, it could even be higher than his current value.

I see. No problemo! Yeah his speed is really impressive.
Could you be kind enough to make me a LB set on the fly? I'm making sets for NTs as players always perform/play a bit differently.
Top

How is his heading IRL? The whitte value makes me curious especially since he's such a great jumper.
Everyone knew it was impossible. Then came along a fool who didn't know it, and he did it.
Top

I might be wrong, but he either is a very low form player or he really needs time to adapt. He looked more decent playing as SB than CB, when he played a CB he showed some bad TW problems.
Better to die quick, fighting on your feet, than to live forever, begging on your knees!
Top
Post Reply
17 posts • Page 1 of 1