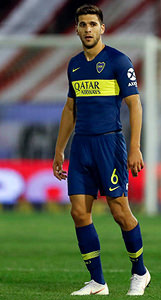 Paablito wrote:His set is very harsh, I follow him in Gim and is a very good defender, good position and he has and amazing header

This matches in Rosario Central are the same when he was in GELP/Boca. He's a good defender with a huge future.

Today vs All Boys made really nice tackles, clean and showed nice response. His abilities to made headers are good and plus has a nice jump, but his main problem is his tw, he forgets that he is in a team and made his own decision in defense and cause defensive errors. His short passes are really strong but his accuracy sucks.
Also his STA and jump could be little better, not to much.
I have some changes in mind, not to dramatic, but to correct this set.
Top

On loan from Boca?
Top

Sps/lps can be green quietly.
Top

He was pretty nice vs Quilmes, continues showing nice jump and has an impressive lps tbh, also looks very responsive, he kept to Caneo away the box, was pretty good in 1-1, didn't suffer with Telechea and Caneo in attack.
Top

Vickingo wrote:His range of passing and technical abilities are far above the average of young defenders, the guy is a good player really. Noticed a great SPS, yellow in many occasions. Also his stamina seems to be above the average, good movement and good coverings...being aggressive and going forwards as he used to do in Gimnasia.

Vickingo wrote:His passing is really good, magnificent I'd say by moments...yesterday showed +80 in sps few times. Also was the captain of the team.

I really support this, was a terrible mistake the last update.
Top

Updated with past suggestions. Probably in the future he'll get better values.
Top

damn it, just watch a little the match of today and his tw sucked, showed realyl good resp and acc, but average ts, pretty nice jump and decent header.
Top

He is atrocious while working with the rest of the defensive players, individually good but very shaky.
"Imagine being this retarded @lucashag you fucking moron, you're seriously trying to write about football and think lingard is a bad player? you're a fucking disgrace, a fucking animal like very fucking south american moron" Relja's burner
Top

He´s incredibly solid in 1vs1 but has a lot of problems to marking in set pieces or when long balls thrown behind him misses the mark , it is something that must be corrected because the forward always be favored by the space he leaves.
Top

his match yesterday was a big LOL, damn crap, shit. His tw looked in '50 tbh, even much worse than any player in lower divisions. He looks pretty responsive and decently fast at his first steps, but cmon dude, yesterday was a match of an average player.
Top

Back to Boca.
Top

Why do not I see the stats of the player?
Top

Why do not I see the stats of the player?
Top

Alee Brizuela wrote:Why do not I see the stats of the player?

some problems with the db, surely in the next hours will see again the stats.
Top

i think he's got a hell of skills but he's just too inconsistent to perform them properly. I always thought his response could be like 83 as he's always going far away of d-line, being agressive at interceptions. Also his jump and header are just crazy, you will hardly ever see Magallán losing a aerial ball from set pieces either offensive or defensive. He's looking damn solid since his comeback against Huracán (despite we played bad last week, our defensive couple did a good match). Perhaps his form could be lowered in the future as he never was a consistent performer.
Top

He has been damn solid in almost every aspect since his comeback. Almost unbeatable in 1vs1 situations and being very fast to do interceptions away from d-line. He always has been a interesting prospect with good defensive skills but now hes showing it in a consistent way imo.
Top

lol at his balance, he is quite good about individual stats as response, speed, jump etc, but the ability to work in a team and how safe could be for his mates is pretty average, especially is really crap working as the defensive unit, leaving a gap behind him and commiting pretty much mistakes and is a common on him since his debut 5 years back or there. He becomes much solid than before yeah but as i said before, still he isnt a reliable to play in the gbs tactics.
btw his wfa must be in 1, is pathetic how bad manages his left foot.
Top