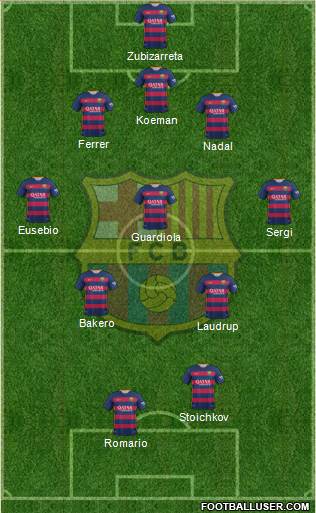 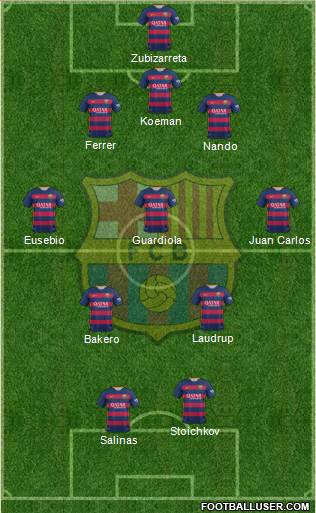 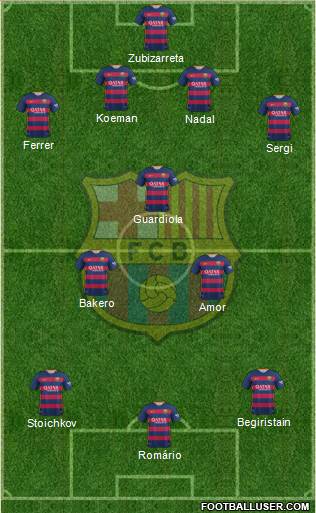 You copy this Barcelona

The Barcelona that I post is created by me.

I from Spain and I love barÃ§a

The Barcelona that I post is created by me.

so please dont say i have copied it, because is mine
I want my son Brooklyn to be christianized, but I still don't know in which religion - David Beckham
Top

Hey as_10, there are only 19 players in this team, you can add this players:
Nando Muñoz (Defender) and Ricardo Serna (Defender)
Top

REAL_MADRID wrote:Hey as_10, there are only 19 players in this team, you can add this players:
Nando Muñoz (Defender) and Ricardo Serna (Defender)

I'd like to add some miedfielders and strikers now, I'll do some research.

Hey! would anybody create the players who rest?
Top

I think new players threads are blocked for a while.

I think Oscar García should deleted of the team, he only plated 312 league minutes during this era and he was a bad player in these times.
You could add Miquel Soler (Def) and Iván Iglesias (Midf).
Top

This should be the starting formation:

Im not sure that the formation was that clear cut, you could even say that because of the movement of the team they didn't really have a fixed position. But I think the midfield 4 lined up as more of a rhombus shape than a diamond, so the 3-4-3 was sort of like a 3-2-2-3 formation. Bakero was placed more centrally as an AM/CM sometimes behind the main strikers with Laudrup playing more on the left AM sometimes as a pseudo winger cutting inside similar to how Iniesta plays. While Amor and Nadal ( Or Nadal as CB and Koeman as DM, maybe Amor as a cm) played a little deeper to support Guardiola as the deep playmaker.

IMO the last Brezza's formation was the best representation of that times formation.

someone with sets for the missing players?
Top You can extend the era to

There's no need to have such extended eras for teams, really.

Given the team a general update, as it was a real mess.

Would love to see this Team completed
Top

As would we all, but I'm not sure there's enough footage to accurately rate many players outside of the first team. Guys like Bakero could probably be worked on though.
Top

The formation is wrong, Cruyff used at this period a 3-4-3 (Diamond)...here is a video where Cruyff explains his tactic at Barcelona