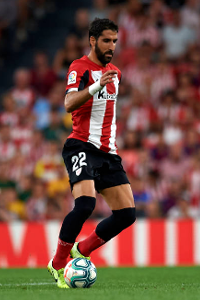 Given him another revamp and restored his tech value as well. Had to give him those values, he's way too dominant in the air and as skilled on headers as almost anyone in the world right now I'd say. Also lowered teamwork, given him 3/3 and increased aggression. Lowered DA, I don't think he really needs higher than this to be honest. If there is anyone with some feedback, suggestions or disagreements I'd really welcome them.

he should be AMF*

Did he play as smf in this match ? I think it's free roaming trait example here.
http://www.youtube.com/watch?v=8GDss1Wm ... lpage&t=61 Yes he has played as SMF several times. In fact it was his main position for a while, a cut-in SMF. Of late he's playing more as a SS, mainly because when Raúl plays as a starter, Villa usually starts on the bench. If it's a D.Costa - Villa pair, then he's again more of a SAMF/SMF

His dribbling ability is not a yellow, granted, but he doesn't have bad technique with the ball. 75 is closer to an average CB, and Raúl has shown he is capable of keeping the ball against opposition. His balance helps, but with that speed, he can't keep the ball against anyone in PES. 78 fits him better. He still can't dribble, but he can make turns and keep the ball like IRL.

I think place kicking is actually analyzed badly in the forum. We've got to consider that it not only affects free kicks but corners and penalties too, and still the average value seems to be around 63. Raúl hasn't taken any free kick or corner that I know (that would be idiotic, he is the best header in the team and possibly the league), but he would be Simeone's first choice for penalty kicks, if not for the possibility of Costa winning the top goalscorer award. I remember a match, not sure if against Elche or Getafe, where Costa took a penalty and missed it. Atletico was granted another penalty and Simeone yelled for Raúl to take it, but Costa ignored him and scored anyway. If Simeone thinks Raúl is his most trusted guy to score a penalty, I think a 62 doesn't make him justice. I know my argument is not the strongest ever, but hey, I would review the PK stats for most players. It is just that the only team I watch with enough frequency to propose values is Atletico (and maybe Barça and Madrid).

Ball control should get a little improvement because Atletico has relied in him a lot these last matches: Courtois or some defender kciks the ball as high and far to Raul's position as they can, and Raúl wins the aerial battle to the left SB, actually controlling the ball many times, and heading it to a teammate the rest. We are talking of balls Cassano would have a hard time controlling most of the time (though I won't suggest a 92

) and Raúl manages to control some of them to the point of being a reliable play for Atletico.

Tenacity and TW seem to be leftovers from his previous time at Atletico. This last years in Osasuna and this season have seen a much more mature Raul, he is more of a team player that always appears in key moments. I can't recall how many times has he scored the lone goal of a match, but one thing is sure: I previously criticized him for disappearing the whole game, and that doesn't happen anymore.
"Her own father got this child on her? We are well rid of her, then. I will not suffer such abominations here. This is not King's Landing."
Top

Can't say I agree with higher BC. Seems kinda sloppy to me really. The rest could be considered, but not sure about TW.

I'm thinking ATT and RES could come down a bit. I'm still convinced he's to be rated pretty highly...but perhaps he's too high. I was just watching again a little of what I've already seen. Yeah he's everywhere in attack indeed, but again most of his opportunities come from his INSANE aerial skills. His ATT was a little low before, but 85 and res around that value perhaps? 85/85 or so. Res is definitely too high.

A huge loss for Atlético, a huge asset for Athletic. Two of the most fearsome headers in Europe at their service. I have given him an update. Mainly lowered his ATT and RES, as well as some technical skills and speed. I have on the other hand increased his STA and Ment and TW (Which were probably right 5 years ago, but they were simply too low for what he's been displaying for the past few years). I have also added *Scoring, which I should have added two seasons ago. Not sure if he'll warrant it this season, but for now I think It's neccesary.

He has almost always played as an AMF in Athletic Club, except in some games like SMF. Actually his position is an AMF/SS hybrid. He isn't a participative player and involved in the team's creation game, basing his style of play on his always good anticipations and good shots, apart from fighting the whole game, being a fucking nightmare for the rival defenses. That is why I have decided to lower his Teamwork.
He keeps his skills of his time at Atlético, but maybe some ones were a little high or, simply, he no longer needs excessively high values. I see him as an irregular player in the offensive facet, having very good scoring streaks and others in which his lack of goal he supplies them with a "trademark" fight.
He's still a damn warrior...
The intelligent people are full of doubts while the stupid ones are full of confidence.
Top