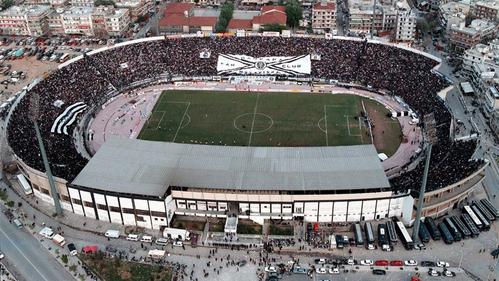 Please post PAOK roster changes here, preferrably with link to a source (even in Greek as long as its confirmed and not just '100% certain')

ok..but can you fix PAOKs emblem ? I fixed the emblem...Can someone fix the links please?
Athanasiadis link is wrong.
APOEL FC Updated. Can you post also a pic?
VAMOS ARIS

tomorrow I will add one or maybe tonight.
APOEL FC

Eyal Golasa is missing from the database and we have to see him play first before a set is made.
I can't find anything official on Mollo yet.
Visit my alt thread: http://pesstatsdatabase.com/viewtopic.php?f=1011&t=25348
Top

bitz wrote:Eyal Golasa is missing from the database and we have to see him play first before a set is made.
I can't find anything official on Mollo yet.

Ever since Prijovic's departure the team has exploded in attack in sharp contrast to the first half of the season, where the won every game in goal difference. Paok seems to have escaped the ''Poacher Trap'' set to make the best of their striker but also one i thought was much more self imposed that it ought to be seeing as many of Paoks capable creators looked stifled, producing meager numbers. It's no coincidence that players like Biseswar and Vieirinha are scoring or assisting in every game since the season restarted without needing that big target in the box. Ofcourse now with a very modern and versatile striker like Akpom as spearhead the team looks to be gaining something from almost everyone since Paok has so many capable attack minded players even in every line.

And while this might seem like a natural shift brought on because of necessity there are certain things, like for example the team's approach in the transfer window that might also show something more. Where Paok opted to acquire 2 technical creative CMs in Misic and Oliveira to only add the already existing Mauricio and Shakhov at a time when the team has only one DM in fighting shape in Canas who himself is missing several games per season due to injury ( just missed the 2 most important games of the season for Paok in the two derbys ), and buying for Prijovic's replacement (1) a project attacker that (2) has the ability to play outside the box and in the wings. From a team that seemed to always prioritize safety in defense and tactical integrity, often overly and in sacrifice of productivity, i think that shows a clear and intentional change of attitude. A bold one that is being implemented smoothly and is already showing results, and that's something to be commended upon.

Today Paok had absolute control of the derby. And while the early deflected goal and the unfortunate decision by Martins to begin Natkho as CM, which resulted in giving Paok a playground of space between Olympiakos' box and midfield might provide an excuse this was clearly a case of a champion team playing at home and overwhelming the opposition. Now with absolute confidence in attack and with their ever reliable defense and winning mentality.

I mean even attempting to cast doubt on them looking at the away against Aek and Olympiakos where they ended up at the mercy of their opponents they remained solid and committed and escaped with 4 out of 6 points.

And what a way to end their 2 year saga of pursuing the title ! Now let's see if they can go undefeated..