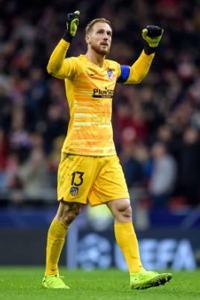 I'm not basing anything on new and old. That's a secondary thing.

But comparing is relevant, no? Not saying that's the whole argument, but it's a legitimate point, is it not?
Top

Yes, as legitimate as me not agreeing with the reasons. I do agree with 98 perhaps being too high, I've thought of that everytime I've checked this thread since I updated him, and thus I've downgraded him. I'm not trying to take anything away from you, except for the fact that I dont think the fact that a particular value sitting above many other keepers' is a good enough reason imo, following that logic the more players we add to the database, the more conservative we ought to be with newly created players, which can lead to having very undewhelming sets until their retirement, which is basically what I'd like to avoid. Remember that classic sets follow a more general criteria in many cases than those of current players, which are susceptible to continuous updates as we can see them weekly. Also, I realize you agree with the newer values, I just don't see how

I think, honestly, it's 3 points too high. Especially given the new stats (catching, etc) are all in red.

pertains. But that's my view.

That's a fair point. And for the record, I've been more taken aback by his numbers than anything, so that was essentially a delayed reactionary post.

That's all good, and well said. I agree with the underlying point, so that's good.

Personally, I think 97 is still high, but we don't have to agree exactly.

How relevant is it to compare other current keepers?
Top

My point about the comparison between a current keeper and a past keeper is that of the possibilities of watching them daily. We have to draw on footage which is often incomplete, but the major issue I have is the mythification of past players to the detriment of current ones. That is, the apparent inhability of current players to be in par - or surpass - highly regarded retired footballers or even those that are still playing but well past their peak. I think it's troublesome, and there's the possibility of a difficult to handle bias. With this I mean, it is much more difficult to have access to 'objective' data for players who aren't playing anymore or whose best moment has already passed, the statements that can be made are limitless and are bound to the inevitable differences between current football and that of the past, even if separated only by a few years. It may be less troublesome regarding keepers, as their role in the game hasn't changed that much - besides the increasing attention paid to their technical skills.

Also, and in line with a thought that is recurrent in the forum as of now, I believe we ought to stablish 'tiers' for current footballers and limiting those tiers to what we can grasp. That is, the figure of past players who are regarded as 'the best of their generation' shouldn't overshadow the current stars and how we regard them, the feeling that everything was better in the past is something I've got present and I wouldn't like it to take over how we rate current players, as eventually, if given enough time, we could find ourselves rating two - let's call them legendary - players with extremely similar sets, which could of course be the case, but surely if we expand our comparative horizons beyond that of current time we'll find it unsettling to see two players have exactly the same set and more than one would want that to be fixed, as it'd take away from the uniqueness of each of them.

As for keepers, as is the case, the possibilities of variation are very very limited. Three or four stats do not allow as many combinations, and its only normal that we have a bunch of players sharing certain values. The question about a current keeper compared to one of the past is valid, yes, but then again we'd have to think of those keepers who sit on lower values aswell. It's way too complicated and not that insightful if you ask me to be applied each time we rate a player.

I meant comparing current keepers to other keepers.

Neuer is coming off a season he really didn't play, and is having a poor season. But his stats, I don't believe, have been changed.

Oblak's GKS are now still 4 points higher. Ok, Neuer is more the complete type. But his Defense is still lower.

That's the kind of comparison I'm trying more interested in making. I can't see how Oblak has higher Defense than Neuer. And the combination of that and GKS throws me off.

This isn't me telling you you're wrong, but my attempt at a discussion.
Top

yeah, neuer was defintly under-rated, and he kinda got left in the past, he deserved quite a bit higher.
Top

So, is it a good time to remind that this set was toned down in general terms so he wasn't too better than the likes of de Gea etc...is it also a good time to say its time to be truly fair with this guy? I honestly have not seen a keeper this good live in my entire life, ever.
Yeah, response should probably be the less accentuated stat for him, but he's surely the highest orange at least? can't say it's all his frame, coverage etc...he's got a response just as good as any other top keeper, then he excels at everything else. I almost feel bad his GKS was brought down due to the same reasons I've stated earlier, I just think even in here he's a victim of weird comparisons.

One of the things that comes to my mind regarding Oblak, Atletico are pretty much blessed that he's average (at best) when it comes to ball playing abilities, because if he wasn't, i really doubt he'd still play for Atletico. Most of the huge clubs would probably still buy him for huge money, but i guess the fact that he really doesn't stand out in terms of ball playing is the reason why clubs hesitate to trigger the clause which stands at 120m, cause that keeper's ability is now needed more than ever at the highest level of the game.

Just gimme a goalkeeper who keeps the goal. The rest is just DLC's.