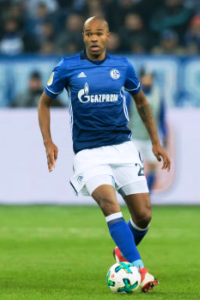 His SP is still this good?
Top

might be i dont know cause i do not watch really Bundes Liga but sp should be 1 of the last things that a player should lose even once his old but many injuries could surely effect the sp.
Cuando saltan a la cancha, decididos a ganar
Se deja de lado tristeza, felicidad y dolores
Y tus hinchas devotos no paramos de gritar
Barcelona, amarillo equipo legendario
De Guayaquil símbolo esplendente
Se suma un año más a tu calendario!
Top

It's true, but it's hard to prove he has kept that SP as players like Affolter and Sokratis are currently playing ahead of Naldo.
"Willy Wanda is Chinese!!!"
Top

He has been injured almost 3/4 of season. All days since 2012, returned last matchday against Mainz but he injured again and there is no date for his return. Hard to rate a player with this kind of consistency (talking about injuries).
...U dared to enter my world...

From Werder Bremen to VfL Wolfsburg:

https://www.vfl-wolfsburg.de/info/aktuelles/detailseite/artikel/neu-von-der-weser.html
The intelligent people are full of doubts while the stupid ones are full of confidence.
Top

Some things I´m not sure about. His low passing speeds. His really high TS.

Hayame wrote:Some things I´m not sure about. His low passing speeds. His really high TS.

agree on TS drop, maybe to 78
and AGG could be lower than 75
the elastico master
http://www.youtube.com/watch?v=LXqPEpeokCg
Top

anyone else give opinion on his top speed?
the elastico master
http://www.youtube.com/watch?v=LXqPEpeokCg
Top

He is one of the best if not the best attacking defender in set pieces in the whole Bundesliga and probably World-Top. The amount of danger he creates is just incomparable, of course his height helps him a lot plus his good leap creates it an unbeatable combo.

I wanted to talk about his BB, i am sceptic with it... I am not suggesting a raise but the way he destroyed F.Santana last weekend was just thumping, he beat Santana every single time until a point it was a complete humiliation, Santana lying in the floor was Wolfsburg-Schalke summary.

The fact why i have posted is because with current combo: Naldo (197 cm, 86 HEA, 81 JUM & 87 BB) can´t compete with Santana (194 cm, 85 HEA, 82 JUMP & 88 BB). Both are rated similar when in reality it was clear that they aren´t. But i consider another point and is that is player's behaviour differs in set pieces while it attacks and while defends, that's why is difficult for me to decipher Naldo vs Santana.
Top

One of the best maybe the best CB of the last saison. His heading game ist worldclass.
Top

One hell of a singing for them.
Top

I think he has lost a lot of top speed, but playing in a defensive line with three CB's and being the one who plays in the middle, acting theoretically as a SW, helps him to fill some gaps. I have some doubts if in a defensive system with 2 CB's he would be such a great player.

I see his Attack very overrated at this time. I really don't see him with a value beyond 63...
His Defense could be 1-2 points lower but he has done a great season, without a doubt.

He doesn't make great efforts, only some sprints at specific moments, more than anything making good anticipations coming out of the "cave". In short: his Stamina could be quite lower, somewhat similar to 76-77.

At this time I don't see his Response at such a high level. I would bet by values between 82-84.

I must admit I'm a little skeptical seeing 72 in SA... He's still a good free kick taker but his SA... somewhat exaggerated. I see him with low 60's. It's just an opinion.

His Jump is a little high according to what I've seen him this season. It comes to my head, more or less, mid greens, not much more...

Condition/Fitness could be 5-6. 7 makes him one of the best CB's in the database and taking into account the current set.

thanks for the comment ET, i've been wondering about this set for a while since it's probably one of the three best cb's in the database since two or three years ago.
If you don't put effort into your post, i won't put effort in my response.
Top

Thanks for the input; I gave him a smooth nerf.
"Willy Wanda is Chinese!!!"
Top

are you sure on those decreases? he may be rated out of sync, but hes been one of the BL's best defenders for years. I don't watch shalke much, but I don't think the hype hes had is for nothing.
Top

He's still a top class defender with those stats. The DEF value is still debatable, but I'm not truly convinced with the former value he had back then.
"Willy Wanda is Chinese!!!"
Top
Post Reply
73 posts