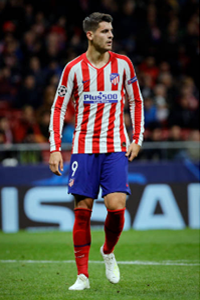 He's finally showing to be more worth of Llorente. He's a very mobile striker with a likable sense for the goal, which looks for him as the simplest thing to do, even if he's not a consistent scorer by any means (still). Current set works fine, though he can easily receive an attack boost to 82. Nothing else relevant to add, except that he's a complete striker, good by header too, and very energetic
Top

Agree, he's proving to be a very effective striker and pretty much is doing the same he did at Real, he is scoring and playing good even tho he doesn't plays full matches.
Can't make suggestions for big changes as is still too early but I agree on ATT boost and maybe we can rise his SA to low yellows, Giovinco has 80 on SA so Morata can have 80 - 81 without a problem, he's always been clinical and very completed striker.

He's been very important for Juve and changes the games with his speed,perfect sub for slow Llorente.
Top

This guy was fantastic against Madrid. He is improving fast, and will soon need a global update. I was impressed by him. Real Madrid couldnt get the ball off their own reject. He gave Ramos a run for his money, and I am sure the former Sevilla man will rank him amongst his toughest opponents this season.
"Remember to be polite"
Top

Also, just by looking at him I know he weighs more than 80 kg. I would say he is between 84 and 86 kg.
"Remember to be polite"
Top

Guys do you realize how quick he is? Last night he was outrunning Alba and Mascherano.
Top

He's 189 cm and 85 kg according to Juventus official website.
Everyone knew it was impossible. Then came along a fool who didn't know it, and he did it.
Top

Turned out to be very average, could be more consistent as second striker or winger (thanks to his pace), does basically zero as striker.
Top

Another victim of the best number 9 ever, Karim Benzema. Being a pure scorer is not enough, you must be brilliant as a deep lying forward and link up striker to play for Real and Ronaldo. Morata is not exactly Carlos Bacca in terms of being just a headless poacher, not at all, hes really decent in cooperation with other players, but not as good as super KB9
Top

Reija, i usually agree and like your posts, but saying Benzema is the best 9 ever even as a joke actually sounds pretty ridiculous. It'd already be quite difficult to argue about him being a top 3 striker in the world right now, and he's clearly miles away from being the best ever.
The goalkeeper isn't another one, he is THE number one!
Top

I wasn't serious about that best ever. But, for me he's the best striker in the world. There are only 4 strikers who are for my as good as him, but i like Benzema's style more. My favourite striker alongside Benzema is Costa. The other 3 are Lewandowski, Suarez and Higuain, ofcourse i cannot put it in the way like "Benzema is better than Suarez and Lewandowski" but i have that, i think alredy well known love for players who are specialist in the dialog with midfield, link up play and key passes in the final third. Benzema is the best in that by far, so from my perspective, my taste, that kind of striker would be ideal for my ideal team. Costa as an all round teamworking beast, both offensively and defensively is also my favourite, but the way Benzema drops deep, goes wide, being 100% tactically responsible, working for Ronaldo is brilliant and puts him on the top fkr me. Higuain, Lewandowski and Suarez are pretty much capable of anything uprfont, goalscoring monsters, also very good in other parts like link up play, but as i said for my taste Benzema is no1. This discussion can be much longer and more detailed ofcourse

Other strikers such as Cavani, Aubameyang, Aguero etc, are arguably the lower class considering they're either one dimensional or overrated so Benzema, in the proper discussion, in the worst case can be considered as number 3 or 4 in the world. Cheers Viyut.
Top

I was already 95% sure you were joking, so it's alright, still i wonder what you think of Harry Kane in that case, he's imo superb when it comes to link up play, maybe second only to Benzema and Suarez. And he's been one of the top scorers for the past 3 seasons (And should have red attack imo), he obviously isn't nearly as technical as Benzema, and there's actually a big gap in technical ability between the two especially in technique and DA, but Kane functions tremendously well in Spurs's system and plays a similar role just as well imo. I do think Benzema is past his prime, and playing below his true potential as he lost some speed and can't be the main player of RM because of CR7, but while prime Benzema is quite obviously better than Kane, i'm not 100% convinced that the Benzema i saw this season, for all his technical talent brings more to the team than Harry does. But then again, it'd be a stretch to say Kane would still play like he does now in RM or in any other club. Still, i'm curious as to what you think about him.
The goalkeeper isn't another one, he is THE number one!
Top

Yeah, i forgot to mention Kane TBH. He's been absolutely brilliant for Spurs in that and his off the ball movement and creating the space for roaming players is incredible. Defo a world class stiker with that just incredible ability to score a lot and work for the team, on and off the ball.

He was maybe the key factor for Dele's great goalscoring season, as he was perfectly "cleaning" the space for him, distracting the oposition. Lovely lovely player, defo in the group if my favourite ones.
Top

Hope he's got potential, the player this set protrays isn't going to be the 20 goal striker we need
Top

Fair enough didn't know that, though Borja got 18 the season before and he's been a fucking joke for swansea
Top

BigStu wrote:Hope he's got potential, the player this set protrays isn't going to be the 20 goal striker we need