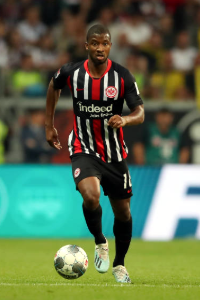 Some suggestions for a little update:

DA 76->74 I see his close control a little below greens,he's decently agile so he seems more fluid with the ball at times than Sidibe but he has real problems when he gets closed down by defenders so he just tries to shield the ball with his body

Header 72->79 He showed some real prowess with his head from set pieces ,last year especially

Resp 75->78 Important for how quick he gets on players with ball defensively as well as his ability to get at the end of balls from set pieces.

For cards he should have Early cross. Offensive Fullback could be given but maybe he doesn't provide support in attacks quite as consistently as the card suggests, Agg might do for now.Also, don't remember him playing CB ,just RB. Finally,his IT should be C, lots of injuries in these two years sadly.
Top
Post Reply
2 posts • Page 1 of 1