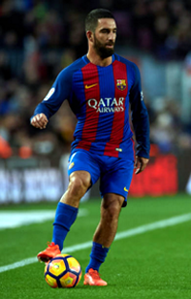 To be fair he has scored alot of great headers at Galatasaray.
Top

i know its bit too soon, but i think we should consider giving him CMF as playable position, he's obviously going to play there a lot for barca
Top

Height and weight should be upgraded, he's 178 cm, 76 kg.
Everyone knew it was impossible. Then came along a fool who didn't know it, and he did it.
Top

He has no chances to play in the flanks for Barcelona. Maybe he does for Turkey, but at club level he's basically playing as CMF and barely as AMF.
"Willy Wanda is Chinese!!!"
Top

Barcelona plays without AMF, Arda will play only on the flanks if there are a lot of injuries. Arda is doing well as a cmf altough he never played at this position before. Defensively he's contributing great. He still need some time to adapt to the system like Suarez and Rakitic last season.

His short and long passing speeds looks improved since he joined Barca.
Top

furymaker wrote:i know its bit too soon, but i think we should consider giving him CMF as playable position, he's obviously going to play there a lot for barca

Something I suggested awhile back, I gave him a CMF since he signed for Barca. There are plenty of players that are not SMF but they do go outside on the wings, Rakitic did it 1st half of last season, Arda does it now, basically every Atletico midfielder has played there too, but I don't think that makes them a SMF.
But best thing for now is give him CMF as playable position, doesn't have to be his main position just yet, but thats probably where he'll play for Barca in most of the games.
Top

He seems really slow on the ball. He has like zero drive in his step, if he beats a player he does it from standing still with small steps just to stop again. he never gets the ball in pace so he can threaten you. He has no tempo/pace in his game.

Arda has overweight and is clearly out of form. He's not a fast player but he lost a lot of his acceleration in the past months. He's very smart player he will be ok still needs some time, he's clearly suffering because of the 6 months he didn't play.
Top

Are you his personal dietist?
Top

Main position should be CMF.
Top Sadly he's nowhere close to this stats. Don't get my wrong, I think this set is almost perfect for his Atletico era (except maybe DEF, which looks a bit high to me), but since he joined Barca he played... well, badly. If I want to be gentle with him. At the beginning I thought it was because of the four months without playing, that could be the problem, but he had plently of chances to play at Barca and he was shit over and over again. I always compare him to Suarez, who also couldn't play for a couple of months and when he finally could play he was a bit out of form for the first two months (also he wasn't very lucky in front on goal). He played 28 until now and he hasn't played even one of them on a good level. Some good touches here and there, a good pass to Suarez yesterday, but that's pretty much it.

He doesn't look this good at dribbling (like, at all), his passing is not incisive, his MENT looks like shit, his TW too, he doesn't look as dangerous as an 80 ATT would suggest and he barely looks like 81 STA. Now, I'm not saying all of these values have to come down, (specially because this league is updated one per year or something) but he doesn't deserve Form 6, seriously. I'd give him Form 4 and wait. Probably he'll need other changes, like way lower DEF/STA/ACC/AGG.
Top

In no way DEF is overrated at Atleti era's, he was one of the best tackles in the team's midfield and well above the average of the AMF.
Because of the suspension and also for the new role its better to wait until the end or half of the season to better analyze his permofances and make any necessary changes.
Top

He was quite efficient at supportive defensive tasks at Atletico.

For now I'm just downgrading Form to 3, in order to replicate what happened to him in past season. I'd wait for at least two months of competition before making further changes, although feedback will be of course appreciated when the league starts. need to be 89 or 88 , 92 max he can't be close to iniesta or alcantara or isco, he is a good dribbler but he can't be on that number, with this number i think he is the 3rd dribbler on the planet after messi and iniesta

Also STA go down to 82 or 83, he can't be better than suarez or even neymar with barcelona he don't defend too much like at atletico and he can't complete 90 minutes and he don't cover too much space, always tired at 70 min,80 min.
Top I think this stats are fits on him well if he is in form and Hes doing well recently but some of them can change.His shots and long pass speed improved also jump and header should be a bit better.His def ability going down he doesnt help on defence much as he did in Atletico.
Top

What should we with this set? He's notoriously trash nowadays but I can't find up to date footage. Any suggestions?
Everyone knew it was impossible. Then came along a fool who didn't know it, and he did it.
Top

You can just give him a 5 point downgrade in everything. it's only a suggestion