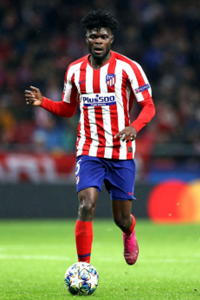 4 goals from 31 appearances fairly
decent for players aged 20 years
who underwent joint loan spell
Almeria, I heard he wanted to be
borrowed by Granada this summer.
I think ATT should go up to 70. He is the potential future players
Top

Good game, Partey is Man of The Match between Atleti against Cadiz yesterday, he could replace Suarez this season!
Top

His weight is 75kg according Whoscored.
"The New Paul Pogba" is on the way! No Thomas No Partey! #Vamos Thomas...
Top

Atleticos wrote:His weight is 75kg according Whoscored.
"The New Paul Pogba" is on the way! No Thomas No Partey! #Vamos Thomas...

Set doesn't nearly reflect his playing style. I have updated him. I have left some values untouched as he isn't playing that much...he's got good qualities but way too chaotic to be a regular. He needs tactical refinement.

He hasn't played much since the last update but I feel I have overrated his attack. He can be dangerous but mainly because of his imposing physical virtues and his audacity when shooting from afar. I think his ATT / DEF ratio would be better off with something around the lines of 72/67

I'm updating him since there is no feedback. Can't blame anyone, his participation has been but scarce but still I feel he's a useful player with some good stuff to offer at certain points, but nothing out of the norm regarding others. Again, I think he's a good all-round player who needs to work a lot on his tactical attributes but who is naturally complete in both att and def. He might also be a candidate for super-sub? Like, it's not that he changes the outcome of the match all by himself and he's not a player you'd think of when you need a reaction against an adverse result, but he is so similar to Correa in that aspect; a player with huge tactical flaws but very good if you rate his individual skills, a player who feels really comfortable when his own team is not in control and who can perhaps offer a different insight to a match that may be going uphill for his own squad. He is crazy, but he's also dareful. He's chaotic, but he's also skilled.

Yeah, he's basically a useful squad player. Tactically competent despite his chaotic nature, as you pointed out; also with decent technical abilities. Not outstanding, but he still makes a reasonable use of them when required.

Indeed, Super Sub is debatable on him. It's not that he will make a huge impact ig when coming from the bench, like you said. But he usually raises his level as a sub, if compared to the small amount of matches he plays as a starter.
"Willy Wanda is Chinese!!!"
Top

He was brutal today, he is a player like no other in the team. He is just so powerful and he does not lack quality and attitude. He is to be an important player this season, and I'm sure he can also offer some goalscoring. Great box to box player who seems to be developing steadily despite of his brief appearances in the past year.

Hat-Trick vs Congo...can't say the oponent was strong really, you only have to watch those highlights but still...he can become such a prolific scorer if he's given the chance to play regularly. Seems like Simeone is starting to appreciate his development and he will surely be an important part of Atlético this season. Let's see what level he can reach, but I for one am very excited about his growth as a player.

I'm going to update some values. He is actually a beast passer. VS Roma he pulled some amazing short through balls, amazing SPS but also accuracy. I didn't see anything special on him regarding that last season...sometimes maybe but I didn't pay enough attention I guess. Also tweaked agi...seemed wrong...he's really awkward really, and with the ball he moves like an amateur. He does share that with other african players I must say

they tend to look awkward so they are usually deceptively good dribblers. But then Thomas can beat too oponents when running with the ball. I mean, he doesn't really do that as often as he used to, now he opts more for a well timed pass from a deeper lying position, but he still runs with the ball here and there. His speed is rather good, and he does show a certain feeling of being unstoppable once he starts running. I'm still not sure how to replicate this exactly, but I leave you this video vs Roma. It may not have been his best match ever, but it was pretty good and there are plenty of examples of those passes, specially at the beginning.

Watch how his teammates give him the responsibility of playing the ball from the back, as conservative as he is in this video...but he never misses a pass. Kinda acts like a talisman and playmaker.

Overall, this season he's playing as a much more tactically disciplined player who has shown to be a really capable passer...I will watch his passing closely, he may even deserve better. He's also showing really good physical endurance as usual, and his reaction skills when going for the shot.

Played as SB vs Roma, but I guess it was an emergency move. Too bad he did awfully, like, everything he usually does he did it perfectly, but Thomas is completely incapable of playing as SB...out of all the midfielders Atleti have he's got the be the least meant to play as SB. Regardless, he's keeping that good form of his, I think he has stablished himself as a starter and that's good news as one of the most gruesome aspects of the upcoming renewall is surely finding replacements for the midfielders...maybe I went a little overboard with his passing, but his raw quality is there. I insist, if he's capable of polishing his passing technique a bit we're speaking of a potential mid to high yellows for passing.

Gonna give him a revamp, since i'm the only one who comments here

. He's stablished himself as a defensive midfielder now, instead of a more...versatile CM we could often witness on his earlier seasons. His role, not his skillset (Except a couple improvements), has kinda changed. We ought to highlight his more than notable defensive capabilities better, and downgrade his attack, which probably was never as good to begin with. He is capable of assisting and he's got a pretty dangerous shot, but overall that's it. His passing is still great, specially short passing, and his technical abilities are probably worse. His DA is but average, and his tech is pretty sloppy (he seems better at controlling with his chest than anything really), but i'd say he's improved slightly? Kinda see him as better than ever before, although his current numbers are inflated, so ironically I'm bringing them down.
He's got an active participation in aerial balls, but overall jump/head should be whites I believe, and his BB should be trademark for him. He's become an excellent destroyer, much more regular and seems to work very well alongside Rodrigo in a somewhat 4-2-2-1-1 formation

Open to suggestions, as usual.

I've been in Mendizorrotza (Alavés stadium) and this guy has done an incredible game with a great goal at the end of the match.
https://www.youtube.com/watch?v=usLK1eu153s

MOTM to me, controlling the tempo of the game, keeping the team in defense, managing the rest of the team perfectly... this player is improving and can become one of the best CMFs in the world. He already is to me eyes.
The intelligent people are full of doubts while the stupid ones are full of confidence.
Top

He's so immense in the derby tonight. I didn't even knew he had such pace in his passes. He's everywhere, clearing in defence, linking the midfield with the attack and even putted in a De Bruynesque low cross of extremely high quality. He's looking even better than Marquinhos in Defensive Midfield tonight. I am surprised.
Top

Ok that was some epic freaking performance there, something I haven't quite seen in a while. Offensively, always finding solutions, through passess, long assists, driving the attack forward as usual. Sublime ball retention, very smart use of his body and his legs too, HAVE Y MENTIONED THE CRAZY PASSING? from every single part of the pitch, any attacking play that went through Thomas was instantly sped up, he already knew the pass before he delivered it and always with great pace. Working everywhere, winning second balls everytime, always the first to support on the pressure, sadly we didn't get to see his great shot, would've been the jewel in the crown. 10/10 performance, worthy of a world top 5 midfielder really.


PD: I forgot to say...its time to think of an overall passing bump imho. Long passing for one is underrated.

i've updated him for the nth time

https://streamja.com/21zWw
The intelligent people are full of doubts while the stupid ones are full of confidence.
Top
Post Reply
23 posts