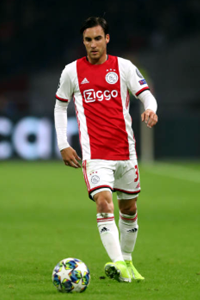 yes, always seemed a more than really interesting player, really complete and with good offensive vocation... IMO this set is good, just need some small changes like a small raise in ATT but not too much more
THANKS FOR EVERYTHING, THERE WILL BE NOT ANOTHER LIKE YOU

Agonizing goal the last game, his RESP is horrible and fantastic speed and stamina. A good future.

by Torneo Clausura. 04/05/2012
Damn it! his stamina is infinite, he did not stop running in no time, as Bufarinni, but the difference is that Tagliafico runs an goal to the other without stopping at high speed, these players definitely deserved orange. His mentality is also very good, never stop because of fatigue, not low level ever, for their great sacrifice conveys much to his team, remember his game against San Lorenzo in added time in this match happened something similar. Well speed is not new, is one of SB's most rapid in the league. What is new is its great accuracy with weak foot, he made a pair of cross with his right foot excellent, one of which Ferreyra header above the goal. Also note that I think it is one of the SB's with worse response, because many fouls committed and almost always late to get the ball, apart from the large number of balls recovered per game due to sacrifice and ambition. He also seemed a kind of LWB/LSMF as Toledo.
Top

Nicolás Tagliafico and Jonathan Gómez from

http://www.realmurcia.es/mur00/press_not.php?id=4379&secc=14&sub=12&ubi=2&sop=0
The intelligent people are full of doubts while the stupid ones are full of confidence.
Top

Good moves for them and Banfield after the relegation had a lot of economical problems. Tagliafico has a huge future and may be -if Banfield wouldn't be in Serie B- could play in a better team.

Juanma, probably jorge would like to make some tweaks in the set as he was following Banfield's matches

vickingo_73 wrote:Juanma, probably jorge would like to make some tweaks in the set as he was following Banfield's matches

It will be a pleasure

He returned to Banfield after the end of loan.
Move him.
Top

He's a hell of lb really, his stamina is crazy as someone told before and yesterday made a lot of full speed runs with the ball carrying it really well and dribbling between players. He's pretty fast too off the ball.
Top

Sometimes aren't any difference between when he runs with and without the ball, is really crazy, crazy fast and agile, his tw could raise few points as his agg, i have some ideas to do minimal changes here, somebody have some?
Top

He is really fast, and has too much attitude ("huevo"), he runs a lot every match and he never get tired and he improved all pass stats. Great player, in June surely he will have many offers from different clubs.
Desde pendejo yo te vengo a ver, y por mi viejo nació esta pasión; son los colores, que me hizo querer llevar adentro de mi corazón.

I agree and i really like the suggestions.
Top

chamakh wrote:I agree and i really like the suggestions.


Crazy SP and ST in there, I don't remember if I mentioned it before but this guy is NT material...he's really good and he's showing it every time he plays. His stamina and speed with the ball is just crazy.
Top

vs At. Rafaela he played as lcb - as other matches - was really aggressive leaving huge gaps on his back, showed amazing speed and crazy stamina, runs to full speed without stop a single minute. seems a little lost playing as cb, with some disconnections with the last line, specially when he must cover the back of arce/noguera.
btw, i really dont know why he hasn't a minimal chance in nt (not the sub-20, etc), imo he's one of the best lsb since a long time, and he can play as sb, smf and now is playing as cb.

lately his tw isn't the same as months ago, is like pratto, doesn't care a shit the tactics of the team, just run all the match with an insane speed/stamina and good mentality. he's playing as lsb or a lcb with 3/3 awareness, is insane the meters that he covers, is in the whole pitch and that's why he's really important to the team
Top

Paablito wrote:lately his tw isn't the same as months ago, is like pratto, doesn't care a shit the tactics of the team, just run all the match with an insane speed/stamina and good mentality. he's playing as lsb or a lcb with 3/3 awareness, is insane the meters that he covers, is in the whole pitch and that's why he's really important to the team

this is the best definition i have about him, he must be the player who covers more mts of the pitch in the tournament, he's a machine of run here and there, pushing the rivals, trying to do the "second move" instead of make the first one, but he covers in a bad way and he takes many risks for the team, leaving his position when going to attack, with bertolo/erviti and when zarif isn't in the team there is not a player to cover the space.
Top
Post Reply
100 posts