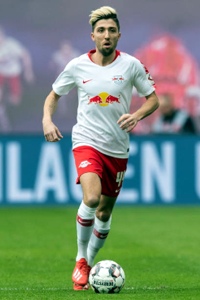 Fantastic player, by far the best player of Salzburg.
Saw some glimpses of his performances in Europa League... He was a real headache for Ajax in both matches.
The set looks fine overall, I just think his EP is undervalued (it's his main asset, seems to be like high 80s most of the time), and he looks quite fragile whenever he's marked (I was thinking in BB 73). I still like this set by PMC.
"Willy Wanda is Chinese!!!"
Top

I have watch some video of him , i see his EP and DA highter than this..but the rest of set seems pefect, great job!
Top

agree, DA, speed in general (especially ACC) and ATT need to be raised a bit Even when there isn't any (explicit) feedback behind your suggestions, I should say I agree with many of them.
I rate Kampl in a similar way to Konoplyanka in dribbling skills, in the sense that both players have a similar style, based more in agility than pure control or speed.
That said, we could increase slightly TS and DA, but EP and ACC need to be heavily boosted, high yellows for both stats.
As you said, he isn't worth a green value for BB and ATT needs to be @ 78-79 to make him as dangerous in offensive display as he's in real life.

Most of Salzburg players are underrated IMO.

True. I'd also like, for example, a review of Hinteregger, another overlooked player with a great future ahead.
"Willy Wanda is Chinese!!!"
Top

good suggestions here... I agree that he doesn't rely much on speed to get past players, I had his BB in the green area because he didn't seem like a pushover when he shields the ball but considering the raise of EP this could kind of balance this.
I'm against you
Top

I hope to watch him in a high level club this next season..

alright I edited these stats but didn't totally take all suggestions.

Attack: He's dangerous upfront but I don't see him edging the yellow area there yet. Salzburgs system is very dynamic and he's rather static compared to the rest of his attacking partners in terms of positioning. He's usually to be found outside of the penalty area where he has more space to initiate attacks instead of being the man to score.
DA: 85 paired with 88 EP would make him a tad too slick imo.
SA: He's got a good shot and he's fairly precise hence I consider a green value okay.
Dribble Speed: I definately wouldn't put him ahead of Iniesta and I consider them to have a similar style in terms of dribbling with Iniesta playing generally on a higher tempo. Plus considering is generally faster than Iniesta I'd say he sits well on a 82.

I also increased his teamwork a bit because Salzburgs offense is working fabulous together and he's an integral part of it.
I'm against you
Top he havent got writen topic ID in editor
Top

this player has some magic, cant wait to see him in a bigger club!
Shollym Patch PES6:

He's a hell of a pressing player. Def, Sta, Res and maybe Ment should be (much) higher.
PES-Up
Top

KillaKlo wrote:He's a hell of a pressing player. Def, Sta, Res and maybe Ment should be (much) higher.

If you know that I suppose you folowed him while he was in Salzburg, why didn't you write that earlier?
Shollym Patch PES6:

Stop trolling, please. I don't want to ban you.
Top

I believe him to be a bit better at dribbling and worse at short passing than this, he clearly prefers dribbling over passing and you rarely see players (successfully) dribbling all over the pitch like he does consistently. His short passes are nothing special and mostly easy to pull off because he creates easier situations for himself through his dribbling. Maybe his passing is/was better, but I never see him showing that on the pitch.
I'd suggest 85 DA, 85 DS, 81 SPA and maybe SPS a few points lower, too. He rarely uses long passes, so not comfortable judging that.

His STA needs to be better, I'd say about 3 points. ATM he's playing a vey demanding role as a box-to-box playmaker, collecting the ball from the CBs, starting the play and following it all the way to the opponent's box, often dribbling large portions of that distance, all while being consistently active and aggressive defensively. Maybe his RES can increase by about 3 points, too. Not sure about his DEF, I feel like it's too low but I'm terrible at judging this stat.

He has to have *Tactical Dribble, though. One of his best features is the ability to reliably find his way out of tight situations in narrow space with multiple defenders around him. Usually he comes up with good solutions and even plays constructive passes after escaping,an ability he shares with Julian Brandt and something that separates both of them from Bellarabi & Calhanoglu (can escape pressure but make bad decisions afterwards).

His registered position should be AM, even when played wide he's not an SM at all (never looking to dribble down the flank and cross the ball).
Top
Post Reply
32 posts