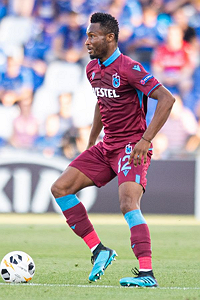 
Yeah, Mikel and Denilson nice stats... Age is not determinant of ability.
Top

Where did you find those statistics pebe?
Visit my alt thread: http://pesstatsdatabase.com/viewtopic.php?f=1011&t=25348
Top

Stats also don't indicate the difficulties of the passes attempted. Interesting stats though...not sure if they will justify a change, but interesting none the less.

I know there was also a thought that he was one of the most underrated CMF Response players. He isn't even on the ladder, and there was mention of him possible being in the 84-87 range. Sorry I can't remember who mentioned it...but I'd like to get that convo rolling

"Stats also don't indicate the difficulties of the passes attempted."

Xabi, Frank and Cesc have Team Work over 90 .
Mikel and Denilson can have though 84-85 in my opinion.

I'm sorry for my english. Thank You for indulgense...
Top

Man, you needs remember the Statistics don't consider the difficult of passes. If a player only make conservative passes and is accurate at that, he surely don't deserve high numbers in passes. But, I'm not saying is that case in Obi Mikel, so I agree with you that he needs an improve in Passing Stats. I have that suggestions:

His accelaration can be 78 and his DA could be 75
Doing a lot of stuff int the Portuguese League -transfers, updating players, updating squads,...
Top

He has done a great job in Essien's absence, despite having a few poor games I feel that he deserves a raise in consistency. Also, 84 stamina is too low for someone like him who runs all over the place
Top

IMO he doesn't deserve the *Passing, I mean Lampard hasn't the star and Mikel has it, it's a joke or what

*PASSING? HA!! Whenever I have seen him advancing in the opponents final third he has very often gone for goal, or played a simple pass, not a decisive Xavi/Cesc/Iniesta/KakÃ¡-esq thru-ball. I believe he got *passing because of his impressive pass completion rate and ratio. What people did not consider though, (I'm sure some who did were ignored) was the ease and simplicity of the passes. He doesn't need this * and I think SPS needs a decrease, passes along the ground from distance do get intercepted.

78??
"When we were winning leagues and European Cups at Real I always said Makelele was our most important player. There is no way myself Figo or Raúl would have been able to do what we did without Claude and the same goes for Liverpool and Gerrard."
Top

EDIT : BTW I think his SA/ST are overrated too, how can he be over Vieira

Pat' is at 70/70 and Mikel who always shots in the sky is better than Vieira with these stats, another joke or what

Did anyone watch Soccer AM team mates, he said (can't remember who it was) that Obi Mikel is the slowest player in the club. I don't know if this is true but maybe it could be considered.
Top

phil-g2006 wrote:Did anyone watch Soccer AM team mates, he said (can't remember who it was) that Obi Mikel is the slowest player in the club. I don't know if this is true but maybe it could be considered.

Slower than Terry? I don't think I ever saw Mikel running at a top speed. But if that's true, I don't mind lowering his speed.
I also agree with removing *passing and SP, ST lowering.
Top

! Thats just absolute madness I'd actually rate Diouf a quite bit higher than Mikel and lets be honest I don't think Mikel even deserves yellow's i wouldn't argue a 78 as a deep-lying playmaker-ish role he doesn't do a whole lot of running.
"If you are first you are first. If you are second, you are nothing" - Bill Shankly.
"I guarantee fourth place" - Rafael Benitez.
Top

I'd rate him even lower tbh, I just said that to see what other people thought of it.
Top

Isn't he better than this?

Is he really that similar to Muntari?
Top
Post Reply
191 posts