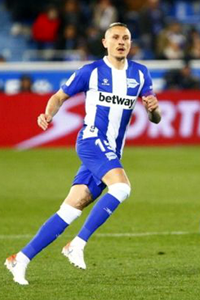 Sick. We probably won't have a chance to watch him in pair with Matic against Wales, unfortunately
Top

Isn't 82 for def a bit too much? H's class in defensive sense but 82 seems like a bit over the top. He's doing most of his defensive job due to his great movement and tactical prowess, not tackling or disposessing. Marking* though is a deserved one.
Top

Last time I checked, his DEF was 80. Can't quite understand why he was raised.
Top

Honestly guys,DEF is high ,a little out of synch with the other leagues,he is over Fernando,Lucas Leiva/De Jong which are different styles of DMF but they are at the top of the ladder and on the CB Scale,Agi is old standards high for me.I can't comment on form since i don't follow Benfica but that 6 on Mitroglou makes me question it too at the very least,considering how hard to find a form 7 in now in the updated sets.Also call dibs on the Spa increase i mentioned some time ago

His DEF was agreed on 80. Someone made a silent upgrade to it and since then no action was made to amend it.
Top

Luisao82 wrote:His DEF was agreed on 80. Someone made a silent upgrade to it and since then no action was made to amend it.

I can cope with 80 in defense, although i think he's absolutely top notch in that department. Not so much because of the dispossession skills but more because the positioning, he's right there at the top with the best midfielders in the world when it comes to positioning.
But i can't agree with 80 for SPA, al least not yet, i'd rather have his TW raised. And i say not yet because that'd put him just two points below Pizzi, or 3 points below William. We oughta revaluate a few other player before raising Fejsa's passing. And imo Fernando doesn't deserve 80, simple as that.
Top

I also find his Defence overrated. He is not a world class tackler or something. I'd give him 78, maybe 79 at very best. His game is based on the excellent defensive movement without the ball, covering and interceptions. His Tw might be a bit higher, though.

Let's take a look at ladders. He is the second best DM on the world with the 82 Defence, on pair with Busquets....
Top

Can't understand why his DEF is still rated at 82. There was a previous consensus to reduce it to 80.

As for defensive abilities without the ball (awareness, covering, interceptions), aren't those also affected by DEF at some degree?
Top

Yeah but it's primarly TW related.

Yeah, that DEF seems to be too much. He can deal just with mid greens plus Enforcer with Aw still at 2/3 to strengthen his defensive approach.
"Willy Wanda is Chinese!!!"
Top

So we're about to raise TW , lower defence and possibly raise SPA? Is that all? I'll leave my comments on it later.
Top

On a side note i wanted to know, he is such a injurie- prone player? I would like to hear if thats true because i found that IT:C a bit strange, but you guys should know better.
!!!CHUPETE LA CONCHA DE TU HERMANA!! , !!VAMOS CARAJO TE QUIERO VER!! , !! TE QUIERO VER PAPÁ!!
Top

I also have him on the lower Attack and Agility. I am sceptic about SPA upgrade but that's your choise. I just see him as a very simple player in the offensive terms. He is doing a simple job and doing it well.

Claudio, yes, he is absolutely fucked up with the injuries. He's had a big amount of them and missed a few years out of field. Even in the last season he's got injured a couple of times.
Top

Yep. I'll have to agree with that DEF decrease.
Fejsa's tackling is quite accurate, but (above all) it's his ability to read the game and intelligently cover the spaces that really make him so efficient. If TW will do it for him, so be it. Not sure about what exactly should be the DEF value, though.

About *Enforcer, as I said in a previous post he's not the typical enforcer.
IMO, he creates a balance between his positional play and his enforcing, meaning that he won't enforce unless the ball is being played in his defensive range. I could be wrong, but my thought is that the *Enforcer card is reserved for a specific type of player, one that will insanely chase after the ball often breaking his positional play. Fejsa is quite combative, but not exactly in that basis.

That being said, I'd increase his RESP and give him *Covering (as suggested by VUKDS), rather than assigning *Enforcer to him.
Top
Post Reply
99 posts