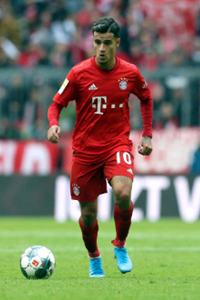 Has he even played a game for their first team yet?
Buon compleanno, il pibe d'oro.
Top

No, i dont agree with this stats.
Top

no, i did it based in his games with u17 national team.

you disagree in what raf?
Top

When I'd seen him, he was a much better Dribbler and much faster than these stats make him out to be. I even think he could rated as more agile, maybe 86/87 but not higher due to his Height/Weight.
Top

agree with it, but i don't put his dribble and speed rates better because i only saw him playing with u17 players or with the reserve team.

but fell free to any suggestions

Players are generally faster and more agile when they're younger.
Top

yeah, so what do you suggest?
Top

Here is what I have about Coutinho:

agree, and suggest a raise in passing stats.

I dont agree in make stats based in sub17 games
Top

I really appreciate yours intentions tamaguchi_japa
but as rafzin, I have to disagree with the creation of this set

We should wait for him to play at least a game for Vasco,
I mean, Macheda from Man U played 3 games already if I'm not mistaken
and he wasn't created yet, since he didn't play enough games with Man U
to have accurate stats....

and i agree with you two, but imo is better have a set and update it after than don't have any set.
Top

You got a point there

Will look out to see him play more to make a more accurate set.
Buon compleanno, il pibe d'oro.
Top

Sorry to be negative, but it isn't good for him to play this year. He is very skilled, and in serie B the CBs are "botinudos" (strong and not skillful), he will end up with a long-term injury, as he is smaller (weaker) than Neymar, and his body isn't as developed as some other 17 year old players.

From friday's match he seemed to have great technique, DA and Agility.
Top

please, move him to Vasco thread

Positions: AM*, SS, SM --> I'd personally drop CM as he rarely if ever features there when playing for the U17 and Vasco. Sometimes, I feel he plays as an SS coming from the left though...

Attack: 74 --> 71 is simply too low for a player that's always taking offensive positions and is actually quite good at that. He's always involved with Vasco's forward play when playing.
Body Balance: 76 --> Why so freaking weak? I've seen Philippe hold off quite some defenders with an 80's number for Balance and he nearly never loses the ball thanks to his technical ability and decent body strength. He's able to withstand a challenge or two without having to fall down right away. Want proof? http://www.youtube.com/watch?v=ZqghoDLE3yg
Stamina: 81 --> He's able to last 90 minutes. Be it on U17-level so far, he's still played full games for the Brazilian squad there.
Response: 77 --> You can't tell me Philippe's reading is worse than that of Robert Flores, Haris Medunjanin and Gai Assulin.
Dribbling Accuracy: 83 --> He's got really spectacular close control for a kid his age. Possibly worth numbers in the higher 80's if he continues his development.
SA: 71
SP: 78
ST: 72
Curling: 81 --> The amount of curl he generally places into his crosses and shots makes them difficult to save for many goalkeepers.
Jump: 73
Technique: 82 --> Stellar first touch for a kid his age. Probably better than many other players in Serie B and could be even higher (don't want to overrate the lad).
Mentality: 73
Team Work: 81 --> 70 is a ridiculous level for a genuine play maker like Coutinho. He is very good at reading the movements of his team-mates and anticipating on them.