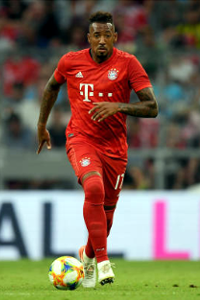 KeyserSoze wrote:He needs Offensive Sideback and lower TW for sure. Maybe even his Aw could set at 3/3, but if done, TW needs to be heavily downgraded as well.

His supportive movements off the ball use to be rather erratic. This is quite more evident when he has to get back with the rest of the D-Line. If he didn't have his TS (and RES, to a lesser extent) he would be an even more wasteful defender. Rating his TW at mid 60s would not be that crazy... And I would also consider that statement for David Luiz.

I still underline this. But I'd definitely set Aw @ 2/3 + Offensive Sideback + TW at 65. With his current Aw and TW he feels extremely balanced tactically speaking ig... And, honestly, I'm not that convinced that's something which describes him properly.
And also, I would put RES much ahead of his DEF. Jurgens made that switch greatly for Ramos' set, and I think the same should be applied for J. Boateng. Something like RES 85 and DEF no greater than 80...

I mostly agree, but will do test him first.
Top

i hope we will see how good (or not good) of a defender he is now under ancelottis lead. as i'm feeling he is a great defender but was a victim of guardiolas system. i hope ancelotti can get the best out of boateng and hummels
Top

kuer86 wrote:i hope we will see how good (or not good) of a defender he is now under ancelottis lead. as i'm feeling he is a great defender but was a victim of guardiolas system. i hope ancelotti can get the best out of boateng and hummels

he played on a team with 80% possession per game, where everyone has the duty to defend in the few times when the team doesnt has the ball ... if he did not show security in that game plan, imagine when he will not really protected.
Top

what i meant is that i always felt the system a bit "chaotic" with the many changes of positions etc and of course everbody tries to win the ball back as soon as possible, but when it dont work the attackers get a lot of space. so i think thats harder for a defender then to play in a more balanced system
Top

Meh, he shouldn't be rated higher than Lahm for his Def. And I'd keep Lahm no higher than 83, so he should be at least 82.

Just noticed that David Luiz's defence is higher than Boateng's. Is this right?
Top

Nope, but Luiz should be on the low green 70s. So it's Luiz who should be updated, not Boa

actually david luiz was downgraded to greens, then immediately was upgraded again i assume by aimar16? would like to know what he sees that we don´t.
defensively speaking i find boateng above luiz, but it's not like jerome is rated wrong to my eyes. He is a chaotic defender with nice distribution and good athlete abilities but not as awful as the brazilian
Bloody Curse!
Top

Only thing I don't like is his BW, 93 is totally over the top looking at the ladders, is he better than Godin or Barzagli at tackling/dispossessing? Yeah, I don't think so. Wouldn't even give him oranges here, 87 max.
Top after reading smalling thread. i think boateng need to balanced too.
smalling at 80 def 77 res 88 ts and 88 bb,everyone saying he is overpowered ingame bcos of ts and bb like pepe in his prime, 100% correct.
boateng at 81 def 85 res 87 ts and 90 bb. reduce his ts is fair

anyone disagree?
Do the unexpected, attack the unprepared.
Top Why is his Defence (81)so low? He is in top 5 (6 or 7 at worst depending on form) CB. I understand that he great passing (both short and long) for defender but still, with 81 def and 85 res he look like average defender, at best. Example: Matip, Bartra and Vermaelen have 83 def but I dont consider them as better playing defence players.
Top

Look at the stats as a whole, hes one of the best in the DB, and an absolute monster in game.
Top

Commentators mentioned that since January 2016 he has missed more games for Bayern and Germany through Injury than he has been available for, something 60 vs 50 something...transfer market backs this up https://www.transfermarkt.co.uk/jerome- ... eler/26485 seems like 47 matches missed for Bayern in the past two years, multiple periods of varying length, but consistently some sort of issue with him.

Couldn't this set use a few tweaks? He was noticeably less mobile and reliable last time I watched him but my impressions might be outdaded.
Everyone knew it was impossible. Then came along a fool who didn't know it, and he did it.
Top

Well yes, he might get some small decreases in def, response, tw and form too. He did good at UCL but then he did not look as solid in Bundesliga.
Better to die quick, fighting on your feet, than to live forever, begging on your knees!
Top

He was left out by Bayern at the beggining of the season, also he was very close to leave the club, he was not playing but when Süle got injuried he started to having minutes again, he also had way better performances than Lucas Hernández, and of course also Alaba is doing good as CB. Even with all those issues he proved that his performances were important for Bayern, despite not being as regular or having the same level like in the past, but still efficient enough to have a ton of minutes this season.
Better to die quick, fighting on your feet, than to live forever, begging on your knees!
Top
Post Reply
158 posts