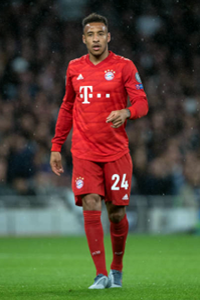 Tolisso is a very solid player and fighter who can play everywhere. Maybe the french Kevin Großkreutz?

Like this set you did but is his BB not a bit underatet? He is very athletic!
Top

I will look at it, will be better with a game as a CMF, which is more is real position.

Yeah cool, but you should be know him better than me. When I saw his set at first I just thought about that BB can be higher, but with second view I saw that his AGI is almost like BB ratet and that is absolutely right. And when you update his BB must AGI also go up because AGI is more his strength than BB.
Top

That's the first season I'm really looking closely at him so stats could fluctuate. I don't see him as yellow BB yet, he loosing control of himself after physical challenge. Indeed looks like he can escape from pressure with nice body turn, not sure yet that agi is better but will keep your idea in mind while watching his next matches

He has a good short passes, some passes with his "on ground" passes. And also a good first touches. Will add little tweaks to the set

I disagree with his shot power. https://www.youtube.com/watch?v=cEevb2iy_A4
He is able to put some power in his shots. I'd say KP should be in high greens, if not yellows.
Top

I think his LPA and LPS are severely underrated too. I agree with these values
Top

Yeah indeed the current set is really outdated, I made it when he was playing just to help the team as SB one year ago. He played all the previous season as CMF and he played the 38 leagues games ! Really consistent player, good offensively and defensively. He has a good eye and can deliver nice passes. I'm giving him a global update.
They have eyes but cannot see; they have ears, but cannot hear; they have tongues, but cannot speak. They are like cattle.
Top

Thank you for the update Adrien, this player could be one of the very best midfielders in a few years.
Top

This set is completely outdated and wrong.
Top

This guy surely has a very bright future. I've been following him this season a lot, and i am completely impressed by his qualities, he's an ultimate box to box player, defensively good, good and calm in possession, good passer, and roams a lot into the box. I am sure he'll play for the very best clubs, and i want to make some suggestions. This set makes him too static in some way i think.

First of all, his attack and aggression are underrated. As i said, he's very good all round player, but very attacking minded, and no way his def is higher than att. He's very, very good in giving the offensive support, he can position himself in the box really good, and he score some goals. I think his attack should go up to 77 or 78and defence can stay on the current level.

Aggression too, that's what i meant when i said this set makes him too deep lying. Basically with these stats, he's kind of deep lying playmaker with low aggression, solid passing and solid defensive qualities. 71 is WAAAY too low. He's surely for yellows there. He's just always in the box. Kinda would put him on pair with Parolo and Mautidi there, they are on 85, but he would be fine with 82 83

The other thing he's brilliant in is headers. But he's really good, and very good in finding the net after corners and set pieces and open play crosses (Altough he wasn't lucky against Sevilla, the first link). https://youtu.be/0Ncn_LcIcko?t=2m22s

He's really, really good in headers, surely for yellows. He's actually for me potentially one of the best goal scoring mids in future, because his positioning sense and headers, + shooting (i'll write about that later) are really top notch. Something about 83 for headers would really be fair. He also can jump quite high. He's not CR7, but considering his height which isn't that great, surely can hit the low yellows, he's a great athlete, can jump, run and hustle really good.

The other stats i'd like to discuss is his shooting. He's able to score with his feet too, and has really proper shot from the mid/short ranges.

https://youtu.be/cEevb2iy_A4?t=5m6s Very nice decision not to run into the 6 yard box but to be an option for a cutback pass, and good finish.

I would put his both SA and ST on higher greens. He's really good finisher, quite oftenly hits the target from the solid ranges, and scores lot of goals (His goalscoring record in Lyon isn't that big, but don't forget he played a lot of games as a RB, which is a tragedy for me, it just limits his qualities)

His balance is also underrated. Obviously this video can tell you everything https://www.youtube.com/watch?v=G7fQJ9y ... be&t=6m11s

I think his passing stats are the only properly rated stats.

He has no problem with his first touch, can't say he's world class, but surely low yellows would be fine. About DA, it's ok maybe can go 1 or 2 points up, his close control is fine, and he's not relied so much on just close control, he mostly uses his long legs and pace in his through the middle runs.

So, *passing Free Roaming and box to box surely should be added. I think this guy is pure gold, i think he'll be world class. Reminds me on Andre Gomes in some way, but more physicall, less technicall though, also a better player in the box and defensively.
Top

I expect from him to shine against Ajax. C'mon Corentin!
Top

He's an extremely complete player. Mental and tactical issues aside, I see him being able to perform in any club really. He has great potential.

His athletic ability is really impressive. He's fast, strong, very dominant in the air and never stops running. Technically speaking, he's also a capable passer (though I'm slightly more impressed with his lofted passes accuracy-wise). He also does some good one-touch passes from time to time.

I'm not impressed with his shot placement (good power though, he has some good speed in his shots) but otherwise he's just great.

Anyway, gave minor tweaks to the set. Increased SA, JUM, LPA, and RES by 1-2 points each, HEA to 80 and added the box to box playstyle. Hole player was great though in my test session, but it made his defensive workrate lacking IMO.
His JUM was already great in this set and I'm doubtful about it. I feel like a greater value like 87 would not even be overrated, but I wanna be cautious with him as it's easy to overpower that kind of CMF in game.
Same for HEA, for the same reasons.
Everyone knew it was impossible. Then came along a fool who didn't know it, and he did it.
Top

Will give some changes, he's slow with the ball and doesn't deserve a green DS. He's also fast over distance but most of times he's walking and doesn't have such a good burst. Ocrin I didn't understand some changed you made. Yeah he's able to give a good long passes but he's very inconsistent in it. He can miss a lot too even if he has the idea. I can't see him on 84 yet.

I disagree with this high jump too. He has powerfull header and can place them well but I never see him reaching such a leap in the air, not saying that most of the times he making a head with a low leap. Really don't where the value come from.
They have eyes but cannot see; they have ears, but cannot hear; they have tongues, but cannot speak. They are like cattle.
Top

Deservedly transfered to a top class club, unfortunately it's Bayern, i rarely watch them in Bundesliga, but nevermind.
Top

Adrien wrote:Will give some changes, he's slow with the ball and doesn't deserve a green DS. He's also fast over distance but most of times he's walking and doesn't have such a good burst. Ocrin I didn't understand some changed you made. Yeah he's able to give a good long passes but he's very inconsistent in it. He can miss a lot too even if he has the idea. I can't see him on 84 yet.

I disagree with this high jump too. He has powerful header and can place them well but I never see him reaching such a leap in the air, not saying that most of the times he making a head with a low leap. Really don't where the value come from.

His inconsistency with lofted passes doesn't look so bad to me. The slight upgrade felt right to me and I don't think he's overrated. He has the creativity, he has the technique. He's not a worldclass long passer of course but I see him competent enough to deserve 84, that value doesn't make him crazy strong at it.

Same for jump, I see him very dominant in the air, I've seen some very good leaps from him to win some headers in the midfield. He doesn't use his leap that well in the box when he performs offensive headers (I reckon that's what you mentioned in your post), so indeed we could give him a lower value to replicate this but then again, I think he would fully deserve the value, it's mostly a matter of style.

Of course I wouldn't mind you reverting these changes, your point of view sounds good as well to me and I don't mind being more conservative with the values.

Next time I'll discuss more of the changes before making them.
Everyone knew it was impossible. Then came along a fool who didn't know it, and he did it.
Top
Post Reply
27 posts