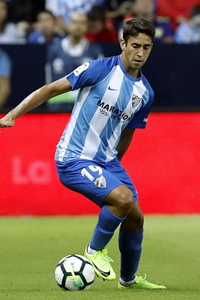 started to see this kid this semester and in his first matches looked nervous but through the season he played much more comfortable and played much better, even the last matches he link up with criteria in attack, made nice shots and scored a few goals, probably is better in this area to keep on eye in a future. Nice overall passer in short and long range and his ball retentions is pretty nice to see, like made some tricks with the ball using both feet with great accuracy.
Top

Today and vs Boca he had two great games in my eyes, he plays so simple and mostly safe for him and his mates, but also he is capable to have amazing matches and has great technique to be the mixed midfielder of what Banfield needs. His stamina looked easily in low-mid yellows those matches, covered a huge amount of mts and also was quite reliable on defense, looks quite secure making nice tackles and having a good reading of the game, but also he moves with intelligence to have more participation in the build up of the game. He isnt really fast but he manages to appear in the right place at the exactly moment in the game.
Top

damn this kid, hes the definition of what we call "a crack", he is sooo good on the ball really well surounded about technical skills and also he is pretty complete in attack or defense. Dont know if you could watched him, but he becomes in such a complete player, his passing is amazing as well as his knowledge of football, he isnt conservative in his style with the ball and takes pretty much risks with it but is also pretty difficult watch him losing the posesion of the ball or failing passes, he can delivery so damn good passes every match, pretty consistency in this area.
About his dribbling he knows how make tight movements with the ball, pretty good close control, carries the ball with looking the best choice in the pitch and always moves creating danger in attack, regarding his defense abilities, falcioni made him so good, turning into a b2b player being safe in defense and dangerous in attack.

Well, isnt very difficult to be better than gago in this

If that is true, Banfield could lost one of his best player by far in the season, Bertolo? Meeh, Sarmiento? Meeh. But him? Dammm it, he is the whole package of what you want to make a great midfield in this modern football, well surrounded and balanced, amazing with the ball, great vision, nice supportiveness. In less words a great player. Still he needs at least two years more here to grow up a little his physique.

Well as i said in the past, he has great potential but he left the club pretty hurry, now is again to play more matches, lets see if he can raise his level to show his potential but for now im really happy for him.
His matches vs Boston River were amazing in every aspect of the game, did an insane effort to be in every position in the pitch, in defense or in attack (in the first match he had 1 tackle, 93.5% in his passing, 1 assist and 2 goal attempts, in the second match 6 tackles, 92.9% in his passing, 2 assits and 3 goal attempts) but in both match he looks out of shape but i think a couple of matches more would be good for him.
Vs central had an "ok" match and the team suffered that (only had 73.5% in his passing, 0 assists, 0 goal attempts, 1 tackle) but imo more was a team problem, Datalo sucks, Alvarez is meh and without Cvita the team inst the same in attack situations.

Lets see how he'll play, if i have some free time ill try to make some gifs of the matches vs Boston.
Top
Post Reply
8 posts • Page 1 of 1