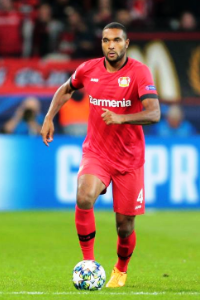 I really think that he is better than this in some values , to me he looks like Boateng

Good suggestion but I first want to see him some more game.
Top

wouldn't compare him to Boateng. He is a classic good tackler, very strong, good header but with limited passing and technical skills. I See his DEF around 78, TS 80, Header 80
Top

Surely better in stamina/Form? Has played (almost) every game so far and has been consistently good, from what I can tell.
Also much better TS.
Top

Tah gets called up for Germany.
Top

I think he should have mid-yellow TS. His pace as a covering defender is instrumental in Bayer being able to field such a high line.

I'd give him *Covering, too.
Top He has potential for sure, but he absolutely needs a better partner next to him. Bender is too invisible for too much of the game and Tah is forced to cover more than he should be asked, which leaves him overstretched and exposed at times. Very fast when he gets going and strong as well added to his willingness and ability to play with his feet are all indicators of the tools he has to be a very good CB, but I think he will need a better partner to make that jump.
Top

Nerfed him a bit, playing with Bender wont make him a better CB. Bender is too fucking inconsistent, he make sweet coverings and pokes in one ame and in minutes later he just wont be useful defending, he is just a mixture of good/bad defending all in one match and among a lot of games. So Tah gets frustrated playing with Bender so that clumsiness gets spread and he gets prone to mistakes as well. Both are fucking uncordinated, they just doesnt work are a CB duo so thats the reason behind Leverkusens defensive problems.

Leverkusen is a nice attacking team, they have players who can resolve a game for sure but in the back they have serious problems. Honestly i don't know they they diddnt hire a better CB instead of keep believing that these two guys can work together.
Better to die quick, fighting on your feet, than to live forever, begging on your knees!
Top

Peter Bosz defensive system wasn't working for a long time. The coordination between Tah, Bender and Dragovic was just awful. But as soon as they looked better in attack they also started to look better in defense, and thats something I totally give credit to him, the other defenders and of course Bosz.

By statistics he is actually pretty impressive, he wons over 65% of his duels and his timing is also quite good. I was thinking to raise his DEF just one point and his response maybe 1 or 2 points.
Better to die quick, fighting on your feet, than to live forever, begging on your knees!
Top
Post Reply
15 posts • Page 1 of 1