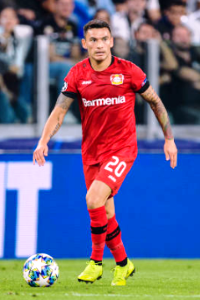 Yes. What values do you suggest?
Farts stinks like a mother fucker!
Top

Other thing, I think that the shooting stats are totally high for him, he shoots well, but I think he neeed to be decreased:

If he had *Middle Shooting he doesn't deserve 77 on SA.

I'd want to update Toloza's shoot and nobody support me. So why this guy is better than him??


EDIT:
I was looking for some info, videos and matches and i concluded this...

He's a quick and talent young player who bases his game on short passes and long very good quality, though sometimes intemperate or too soft. Use also the middle-distance shot with good results sometimes, but most of at the center or very high. In addition he resolved some free kicks, but only sometimes with precision. He took my atention 'cause is a player who go up a lot even taking very offensive positions.


So there are my suggestions:

I will take your suggestions Akron.

There isn't much difference between Aránguiz and Matías Rodríguez in STA, so I suggest 85 for Charles.
And he has become a Box to Box CM, probably among the best in the Chilean League.
Finally, Awareness should be BAL.
"Willy Wanda is Chinese!!!"
Top

when are you going to update him

? I need him a lot jeje
Top

I already made a comment about Box to Box and I think is a must for him.
"Willy Wanda is Chinese!!!"
Top
Post Reply
107 posts